The tomb of the Eighteenth Dynasty king Tutankhamun (c.1336–1327 BC) is world-famous because it is the only royal tomb from the Valley of the Kings that was discovered relatively intact. Its discovery in 1922 by Howard Carter made headlines worldwide, and continued to do so as the golden artifacts and other luxurious objects discovered in this tomb were being brought out. The tomb and its treasures are iconic of Egypt, and the discovery of the tomb is still considered one of the most important archaeological discoveries to date.

Despite the riches it contained, the tomb of Tutankhamun, number 62 in the Valley of the Kings, is in fact quite modest compared to the other tombs on this site, in both size and decoration. This is most likely due to Tutankhamun having come to the throne very young, and even then ruling for only around ten years in total. One can wonder at what riches the much larger tombs of the most powerful kings of the New Kingdom, such as Hatshepsut, Thutmose III, Amenhotep III, and Ramesses II once contained. 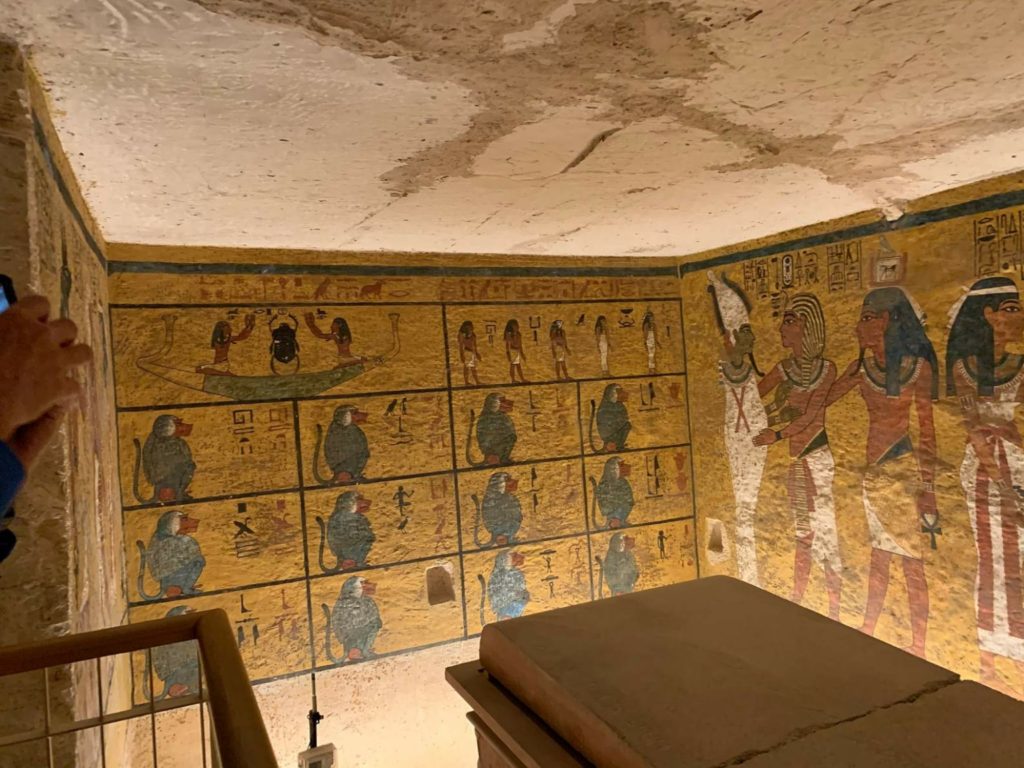 Only the walls of the burial chamber bear any decoration. Unlike most previous and later royal tombs, which are richly decorated with funerary texts like the Amduat or Book of Gates, which helped the deceased king reach the afterlife, only a single scene from the Amduat is represented in the tomb of Tutankhamun. The rest of decoration of the tomb depict either the funeral, or Tutankhamun in the company of various deities.

This small size of the tomb of Tutankhamun (KV62) has led to much speculation. When his successor, the high official Ay, died, he was buried in a tomb (KV23), which may have been originally intended for Tutankhamun, but which had not yet been completed at the time of the death of the young king. The same argument has been made in turn for the tomb of Ay’s successor, Horemheb (KV57). If so, it is unclear for whom the eventual tomb of Tutankhamun, KV62, was carved, but it has been argued that it existed already, either as a private tomb or as a storage area, that was subsequently enlarged to receive the king.

Whatever the reason, the small size of the tomb meant that the approximately 3,500 artefacts that were discovered inside were stacked very tightly. These reflect the lifestyle of the royal palace, and included objects that Tutankhamun would have used in his daily life, such as clothes, jewelry, cosmetics, incense, furniture, chairs, toys, vessels made of a variety of materials, chariots, and weapons.

The ancient tomb of Tutankhamun was officially discovered in 1922 but ever since then, experts have tried to effectively explain the many discoveries that ensued shortly after.

Take for example all of these artifacts that were uncovered in the tomb. For the most part, they may not seem all that special as most any other pharaoh was also surrounded by strange artifacts, but none are as strange as these ones, to say the least.

Just take a look at this strange ring that was uncovered right next to the young pharaoh’s head. The materials used for its construction are strange enough but even stranger than that is the actual strange humanoid creature that is depicted on it. 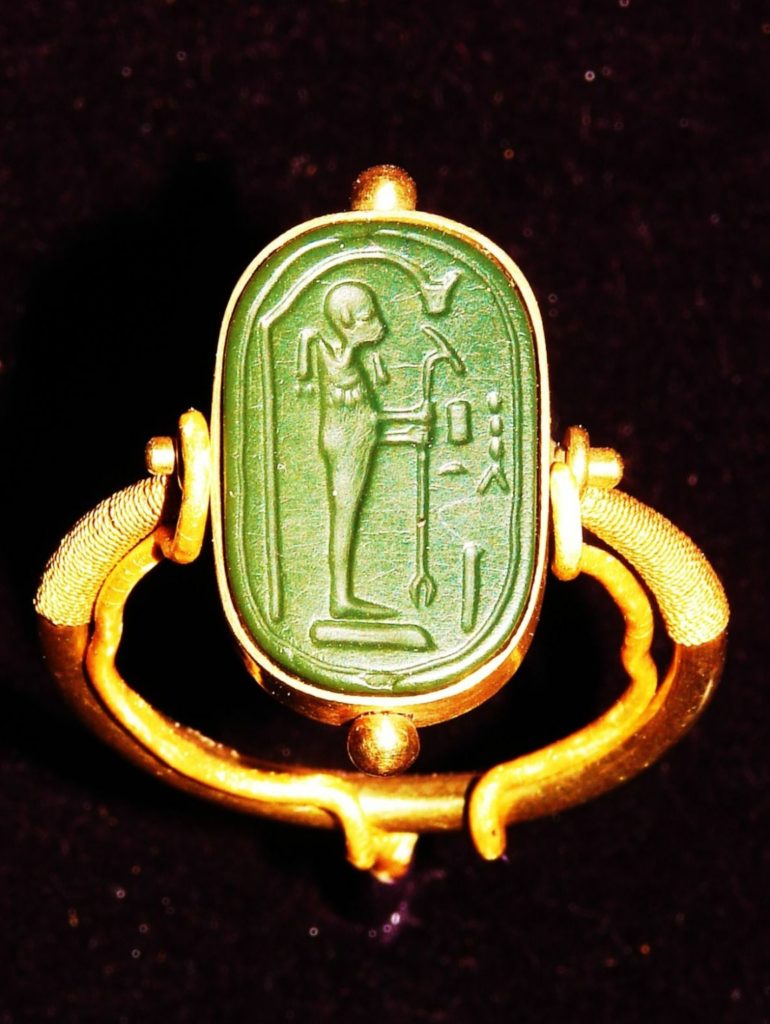 For some reason, in the scientific world, it is believed that the god Ptah is depicted on it – while on the reverse side of the ring there is an inscription Amon-Ra (the Sun God, the supreme deity of the ancient Egyptians).

The Egyptologists that uncovered it stated that this was all just a misunderstanding as that is just a representation of Ptah, the ancient Egyptian god, but that still doesn’t explain its strange alien look like no other depictions of the Egyptian God even resemble this, to begin with.

The ring is said to date back to 664-322 BC as far as we know and the ancient god Ptah is said to have lived on our planet around five to fifteen thousand years ago.

In any case, the creature depicted on the ring is very interesting and clearly has an unearthly origin – by the way, in the mythology of the Egyptians, the gods had a direct relationship to the cosmos. And the pharaohs descended from the cosmic gods. Interestingly, according to many ancient sources, the history of the Egyptian dynasties dates back many thousands of years, much more than modern historians believe.

It is curious that the god depicted on the ring holds in his hands a divine staff with magical properties. It is believed that such staff could control the weather, break rocks and perform many other miracles – and perhaps they were high-tech tools.

This ring has been used in a lot of arguments to prove the fact that the ancient Egyptians were very in tune with the extraterrestrial beings of their time, as they essentially worshiped these beings as Gods at the time.

This ring is kept at the Walters Museum in Baltimore (USA). According to the description on the museum’s website, it was purchased in 1930 in Cairo. 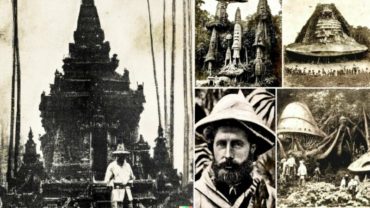