A farmer in Ireland stumbled across an ancient tomb virtually untouched for thousands of years.

When an excavator overturned a large stone to reveal a secret chamber beneath, the burial site was discovered on Ireland’s Dingle Peninsula. 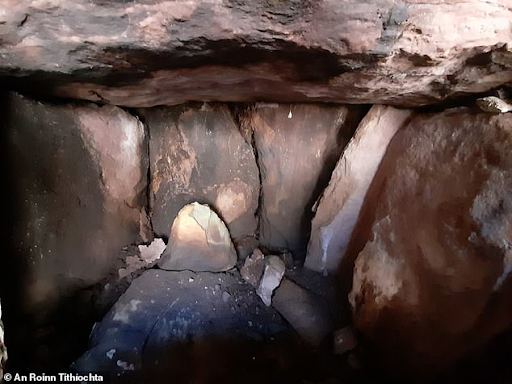 Local archaeologists discovered what appear to be human bones and a smooth egg-shaped stone – all of which might contain information about ancient burial customs.

But unlike most Bronze Age tombs, it was constructed entirely underground—meaning it could be even older.

A farmer in southwest Ireland moved a large stone on his land and discovered this ancient tomb underneath. The site included a sub-chamber near the front of the grave and a smooth oblong-shaped stone, and what’s believed to be human bones.

The tomb was discovered during routine land improvement work, according to RTE, when a large stone was lifted to reveal a ‘slab-lined chamber’ underneath.

An adjoining sub-chamber was found at what appeared to be the front of the tomb, containing what is presumed to be human bone fragments.

A smooth oval-shaped stone was also uncovered, although its purpose is unclear.

Archaeologists from the National Monuments Service and the National Museum of Ireland visited the site and believed the potential tomb dates to the Bronze Age, from 2000 to 500BC.

Bronze Age tombs have been found in the region before, but almost all of them stick out the ground. The discovery ‘is wholly concealed, suggesting it may be even older.

But it could be even older given its highly unusual design. 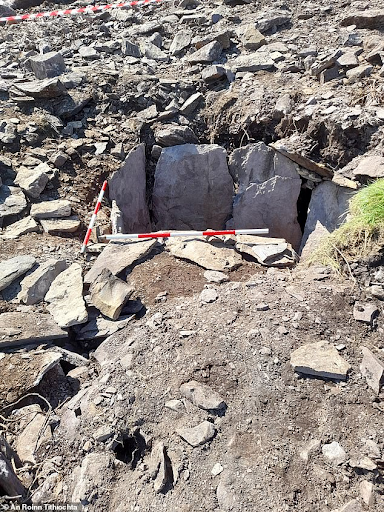 “Given its location, orientation and the existence of the large slab, your initial thought is this is a Bronze Age tomb,” archaeologist Mícheál Ó Coileáin told RTE.

“But the design of this particular tomb is not like any of the other Bronze Age burial sites we have here,” he added.

“It may be earlier, but it’s tough at this early stage to date it.”

‘That is very rare,’ Ó Cíobháin said. ‘It is an extremely significant find as the original structure has been preserved and not interfered with, as may have occurred in the case of other uncovered tombs.’

The tomb was discovered on farmland on southwest Ireland’s Dingle Peninsula, inhabited for 6,000 years. Its exact location is kept private to preserve the site for future study. 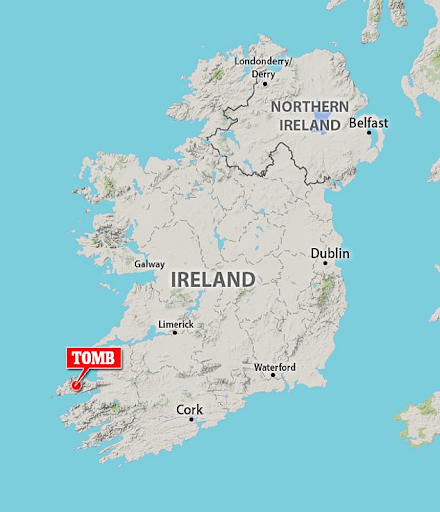 The discovery could prove invaluable to understanding prehistoric burial rituals, he said.

Before, bronze Age tombs were found in southwest Ireland, particularly in Cork and Kerry.

They’re typical ‘wedge tombs,’ which narrow at one end and protrude above the ground.

‘[But] this one is completely concealed, Ó Coileáin told The Times.

Because so much of the newly discovered tomb is underground, ‘it is difficult to assess the layout fully,’ he said.

‘It is very well built, and a lot of effort has gone into putting the large capstone over it,’ Ó Coileáin told the Irish Times. ‘It’s not a stone that was just found in the ground. It seems to have some significance.’

According to the National Monument Service, the tomb is in “critical” condition and must be kept secret for the study’s sake.

Known to have been inhabited for at least 6,000 years, Dingle Peninsula has been the site of several archaeological discoveries, including clochán, dry-stone beehive-shaped huts built by the Celts. 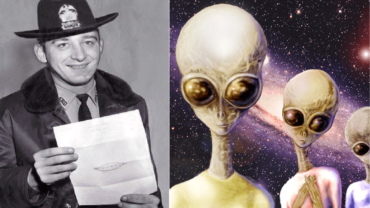