In 1798, the first permanent American settlers from the east arrived in the Western Reserve of Ohio. They began to clear the forests along the southern shore of Lake Erie. And in the process, they found numerous ancient earthen structures and almost everywhere the finely made spear points and other artefacts of a long forgotten and once populous native society — a people obviously quite different from the Massasauga Indians then living in that country.

A generation before the first immigrant explorers of western Pennsylvania and southern Ohio had made similar discoveries: the extensive earthworks of Circleville and Marietta, Ohio, were already well publicized by the time that settler Aaron Wright and his companions began to stake out their new homes along Conneaut Creek, in what would later become Ashtabula County, Ohio. 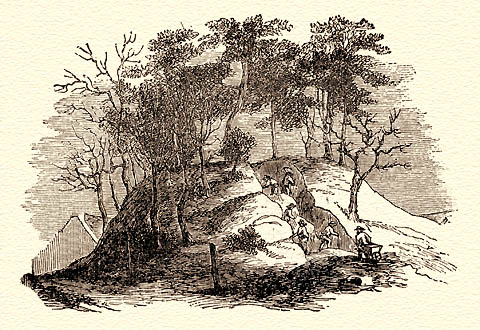 The Strange Discoveries of Aaron Wright In 1800
Perhaps it was because he was a single young man with plenty of energy, or perhaps it was because his choice for a homestead included a large “mound builder” burial ground. Whatever the reasons may have been, Aaron Wright has gone down in the history books as the discoverer of the “Conneaut Giants,” the unusually large-boned ancient inhabitants of Ashtabula County, Ohio.

In an 1844 account, Harvey Nettleton reported that this “ancient burying grounds of about four acres” was situated in what soon became the village of New Salem (later renamed Conneaut), “extending northward from the bank of the creek to Main Street, in an oblong square.”

Harvey Nettleton Noted In His Account:
“The ancient graves were distinguished by slight depressions in the surface of the earth disposed in straight rows, with the intervening spaces, or alleys, covering the whole area. It’s estimated to contain from two to three thousand graves.

These depressions, on a thorough examination made by Esq. Aaron Wright, as early as 1800, were found invariably to contain human bones, blackened with time, which on exposure to the air soon crumbled to dust.

The prehistoric cemetery on Aaron Wright’s land was remarkable enough, just in its size and the configuration of the graves; but it was what was in those graves and in the adjacent burial mounds that captured Nettleton’s attention.

The mounds that were situated in the eastern part of what is now the village of Conneaut and the extensive burying ground near the Presbyterian Church appear to have had no connection with the burying places of the Indians. They doubtlessly refer to a more remote period and are the relics of an extinct race, of whom the Indians had no knowledge. 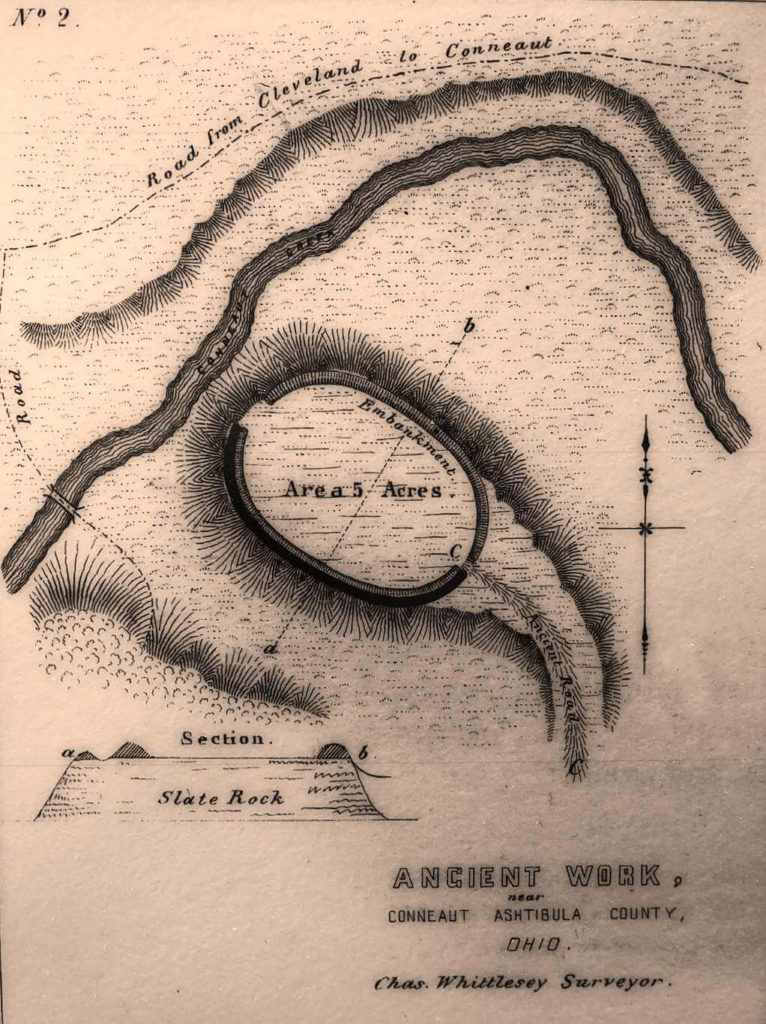 These mounds were of comparatively small size, and of the same general character of those that are widely scattered over the country. What is most remarkable concerning them is that among the quantity of human bones they contain, there are found specimens belonging to men of large stature, and who must have been nearly allied to a race of giants.

Skulls were taken from these mounds, the cavities of which were of sufficient capacity to admit the head of an ordinary man, and jaw-bones that might be fitted on over the face with equal facility.

The bones of the arms and lower limbs were of the same proportions, exhibiting ocular proof of the degeneracy of the human race since the period in which these men occupied the soil which we now inhabit.”

What Nehemiah King Found In 1829
Nettleton’s account was widely circulated when it was summarized in Henry Howe’s Historical Collections of Ohio, 1847. Howe writes of Thomas Montgomery and Aaron Wright coming to Ohio in the spring of 1798, and of the subsequent discovery of the “extensive burying ground” and of “the human bones found in the mounds” nearby.

Howe repeats the report that among these uncovered bones, “were some belonging to men of gigantic structure.” He also tells how, in 1829, a tree was cut down next to the ancient “Fort Hill in Conneaut” and that the local land owner, “The Hon. Nehemiah King, with a magnifying glass, counted 350 annualer rings” beyond some cut marks near the trees centre.

Howe concludes: “Deducting 350 from 1829 leaves 1479, which must have been the year when these cuts were made. This was thirteen years before the discovery of America by Columbus. It perhaps was done by the race of the mounds, with an axe of copper, as that people had the art of hardening that metal so as to cut like steel.”

The same year that Henry Howe’s history of Ohio appeared another interesting book was published by the Smithsonian Institution, entitled: “Ancient Monuments of the Mississippi Valley.” On that seminal report by E. G. Squier and E. H. Davis appears the first known published description of “Fort Hill,” that strange pre-Columbian landmark situated on the property of Aaron Wright’s neighbour, Nehemiah King. 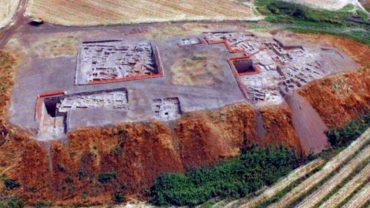