Fossils are formed in various ways, but the most common is when a plant or T animal dies in water and is buried in mud and silt. Soft tissues decompose rapidly, leaving behind hard bones or shells. Over time, sediment builds up on top and hardens into rock. When the erosion processes occur, these secrets in stone are revealed to us.

However, several prehistoric discoveries refute this conventional theory of fossilization and fossilization technique. These remarkable findings have astonished experts since they are far beyond anything seen before in archaeology. They’re like time capsules that, while they may appear to be wintry at first glance, are, in fact, extraordinarily well-preserved and in fantastic shape. They make us believe they’ve somehow frozen in time. 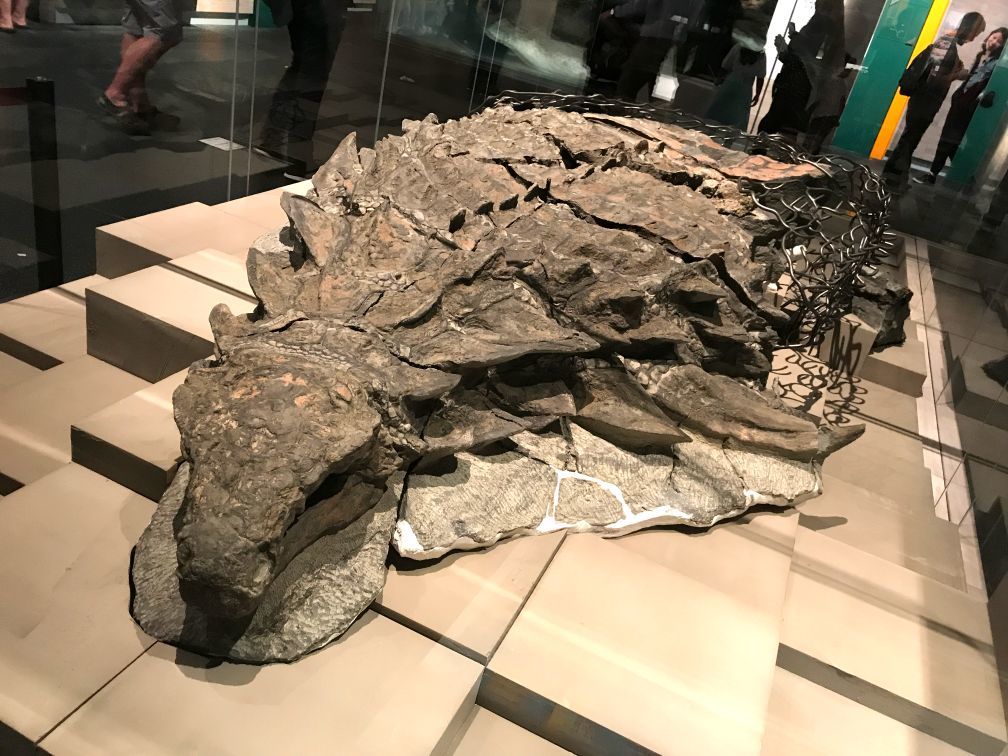 This isn’t a dinosaur fossil; it’s a mummy. Scientists think the 110 million-year-old was swept to sea by a flooding river, sank, landed on its back, and was pressed into the ocean floor. It’s so well-preserved that it still has intestines and weighs 2,500 of its original 3,000 lbs. This prehistoric, armoured plant-eater is the best preserved fossil of its kind ever found. 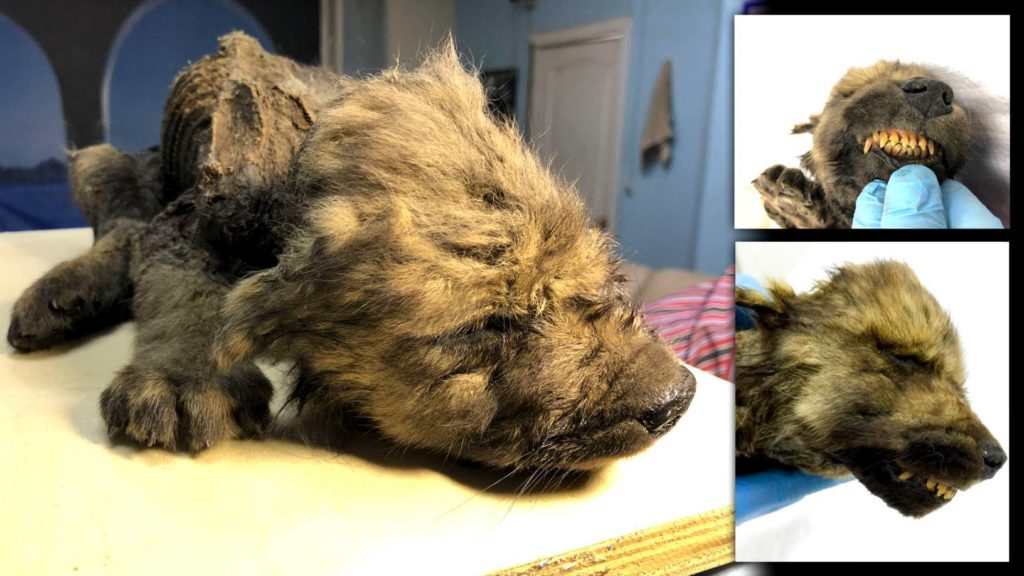 In Siberia, a 20,000-year-old dog was discovered frozen. The remains of this ancient creature are perplexing researchers since genetic testing revealed it to be neither a wolf nor a dog 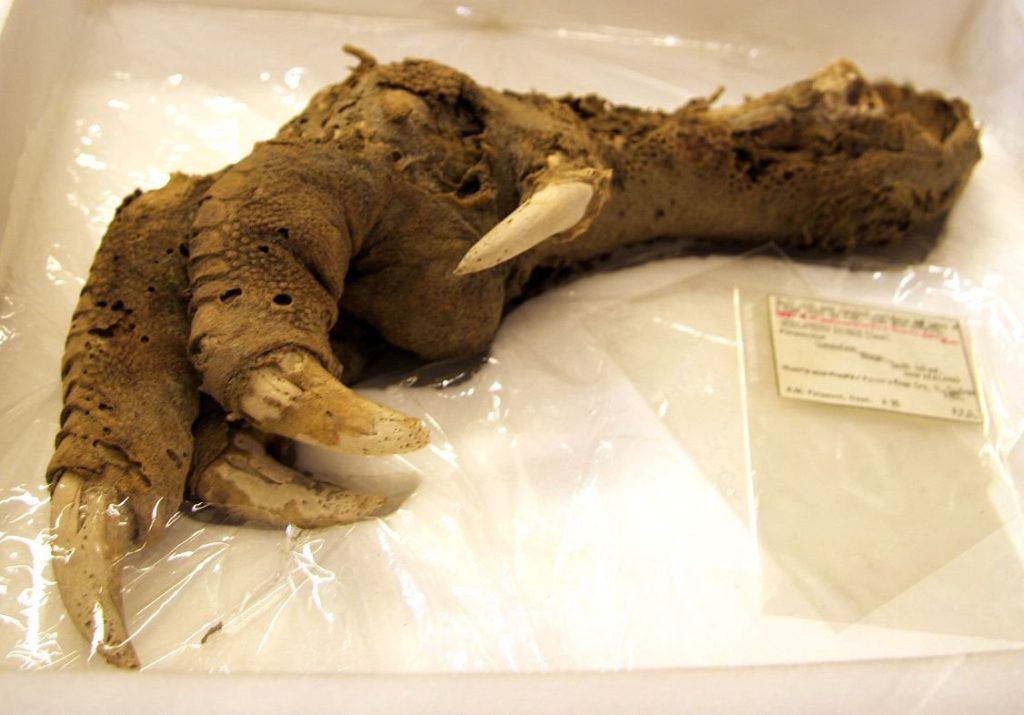 When they examined the claw, they found a completely preserved one with flesh and muscles still attached. It’s a complete Megalapteryx foot, the final Moa species to go extinct. For millions of years, nine distinct species of large flightless birds known as Moas (Dinornithiformes) lived in New Zealand (Then, about 600 years ago, they abruptly went extinct, shortly after humans arrived in New Zealand in the 13th century. 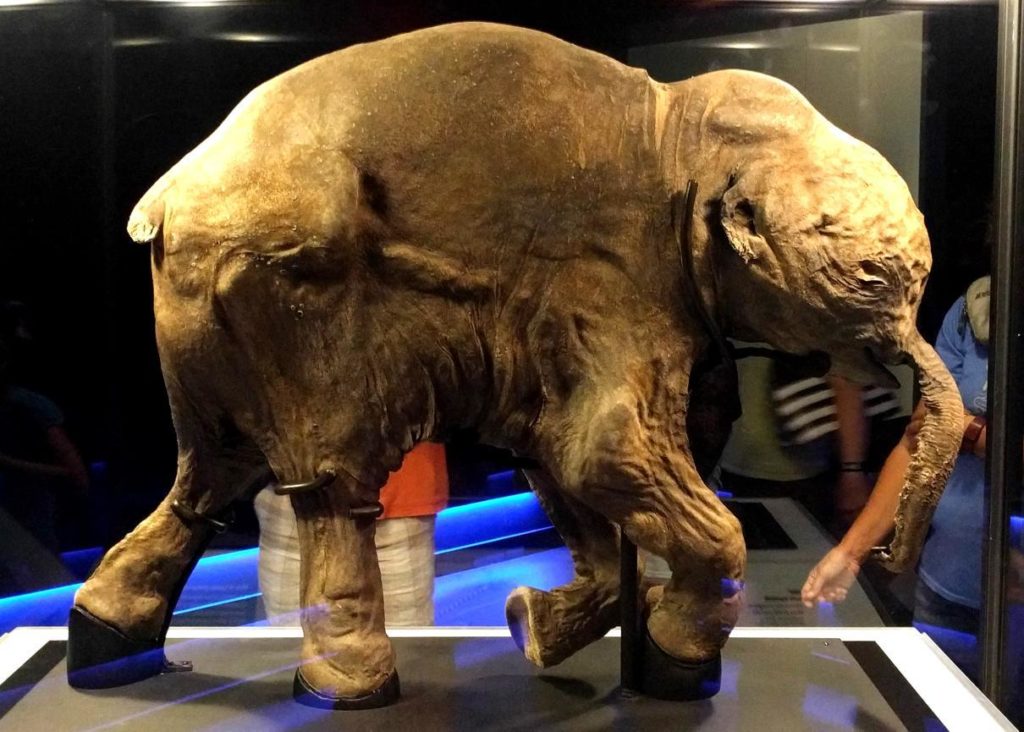 In 2007, a Siberian shepherd and his two sons found the colossal Lyuba. Lyuba is a one-month-old woolly mammoth that perished approximately 42,000 years ago. She was discovered with her skin and internal organs intact and the milk from her mother in her stomach. She is the most well-preserved Ice Age mammoth ever found, and her existence is teaching researchers why her species vanished. 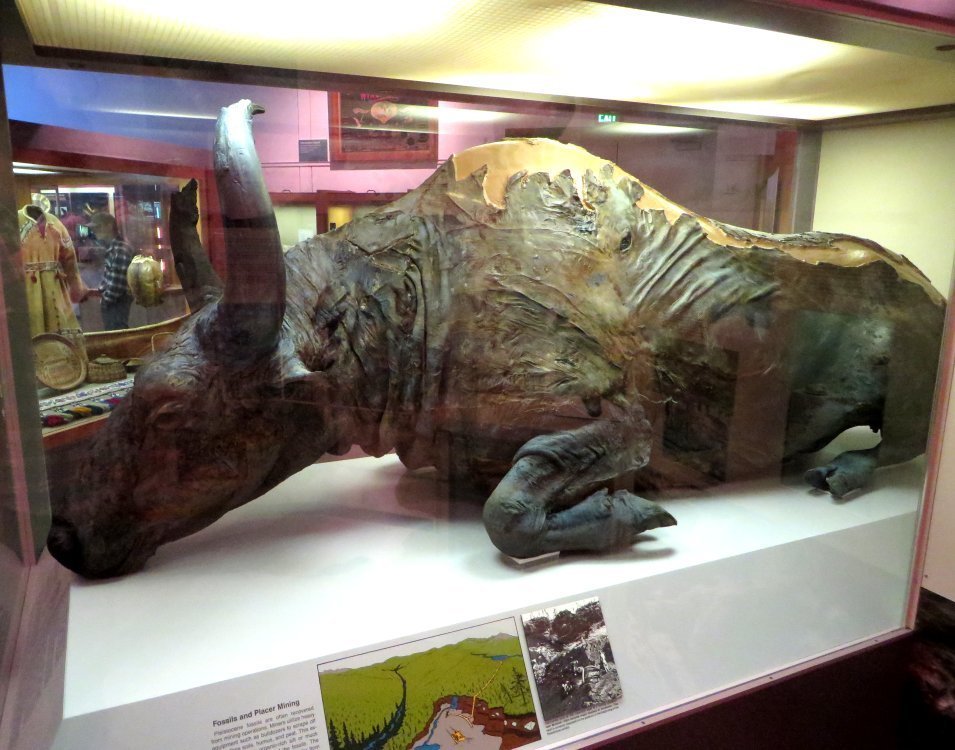 In June of 1976, the Romans, a family of miners, found a remarkably well-preserved steppe bison carcass encased in ice near Fairbanks, Alaska. They gave it the name Blue Babe. It was 36,000 years old and lived on the enormous steppe with ancient horses, wooly mammoths, and wooly rhinoceroses. The University of Alaska Museum of the North in Fairbanks has a replica of Blue Babe on display. The aurochs went extinct some 8,000 years ago, during the early Holocene – the current geological era. 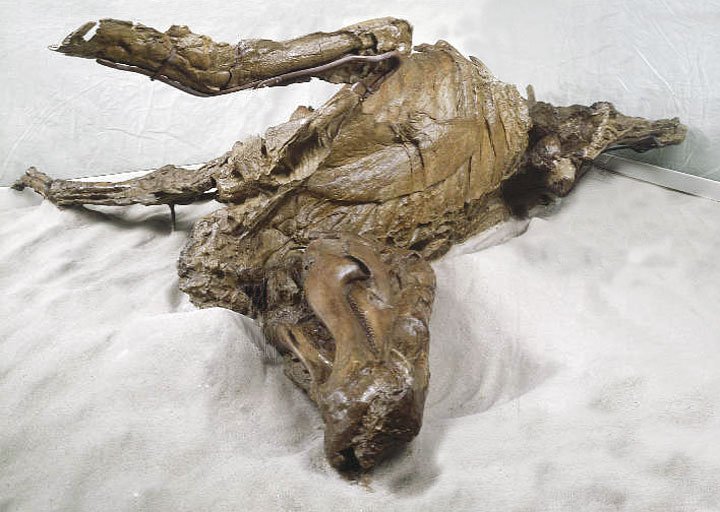 A century ago, a father-son team of paleontologists (the Sternbergs) discovered an exceptionally well-preserved Edmontosaurus hadrosaur in the barren regions of Wyoming, the United States. The quality of preservation was so excellent that skin, ligaments, and other soft tissue components were in good enough condition to conduct a comprehensive study. The Edmontosaurus mummy is AMNH 5060 and is kept at the American Museum of Natural History (AMNH). 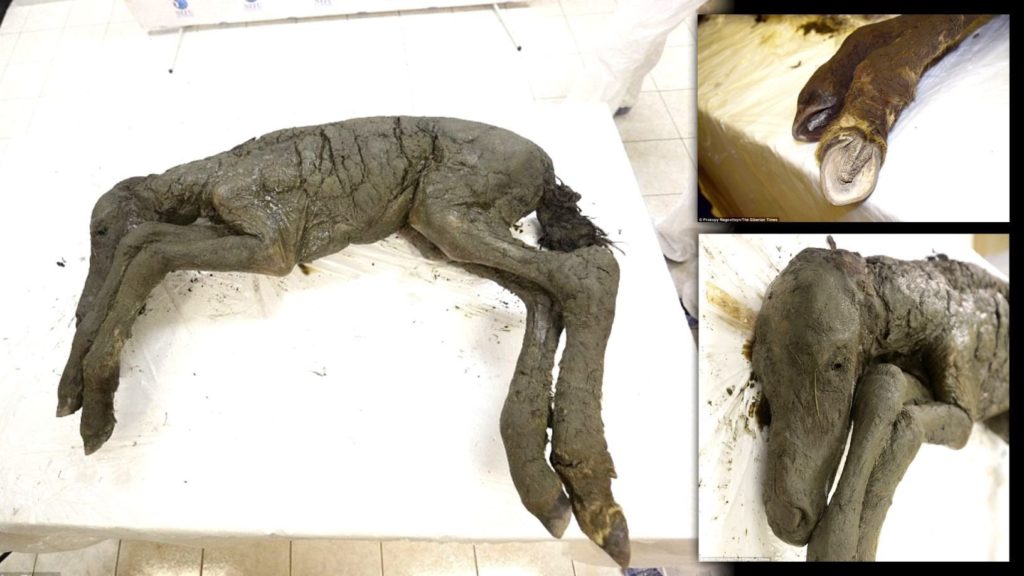 A foal that was approximately 42,000 years old was discovered in Siberia. It still had a liquid form of blood. The world’s blood is here. The Lena horse, also known as the Batagaika foal, is an ice age calf discovered in the Batagaika Crater in eastern Siberia and thought to have been only two months old when it perished most likely drowning in mud. 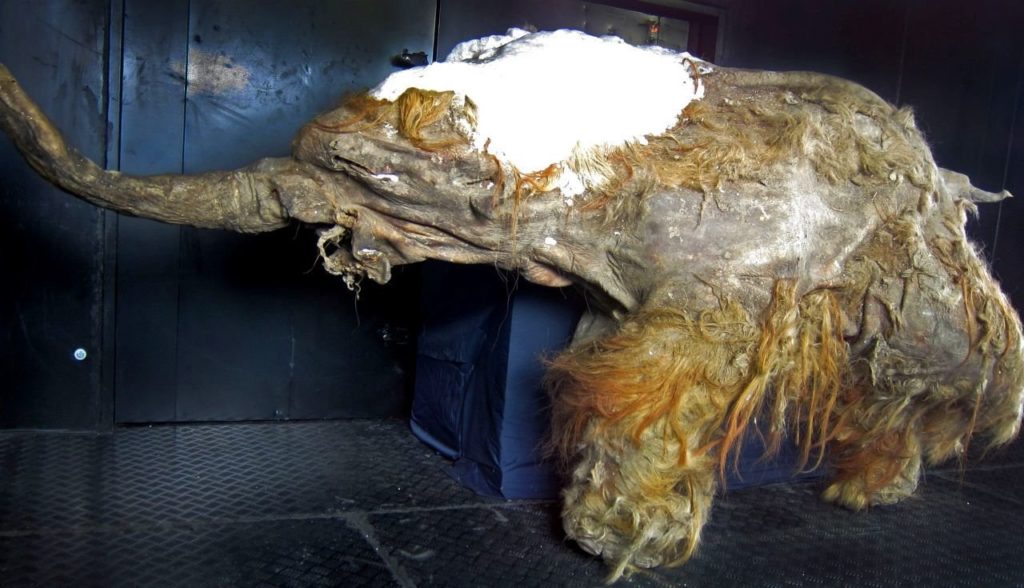 Yuka, a mummified woolly mammoth, may have roamed the earth about 39,000 years back. Yuka was found frozen in the Siberian permafrost, which indicates she was between six and eleven years old when she died. It’s one of the most well-preserved mammoths in the field’s history. Yuka stayed in such good condition because she remained frozen for a long, unbroken period.

The beast got trapped in a bog or fell into the water and perished, unable to free herself. As a result, the lower body, including the lower jaw and tongue tissue, was remarkably well-preserved. Prehistoric and present predators ate the upper torso and two legs, still in the dirt, leaving almost nothing. Despite being frozen for millennia, scientists could recover flowing blood from Yuka.

Valley Of The Whales

The earliest suborder of whales, known as the Prototypic Whales (or Auñonavis), lived in the Western Desert of Egypt’s Wadi Al-Hitan and Whale Valley. It was added to the UNESCO World Heritage List in July 2005 for its hundreds of fossils of fossilized archaeocetes, which are among the most ancient whales. 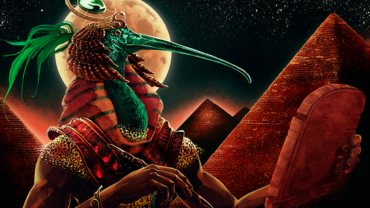