In the US state of Alaska, a series of strange events occurred. Perhaps some people recall the UFO encounter involving JAL freight flight 1628, which was the only one to occur over Alaskan skies. Other examples, on the other hand, would almost certainly make Alaska one of the finest UFO hotspots.

The CIA’s secret program Stargate Project was at its pinnacle in the 1980s. The US government had remote viewers who claimed to employ clairvoyance, precognition, or telepathy to obtain and report knowledge about targets that were shielded from ordinary perception, according to declassified CIA papers.

A document titled “Sun Streak” was found in the files, and it described the secret subsurface constructions of extraterrestrial origin. Under Mount Hayes, Alaska, one of these structures was discovered. The Defense Intelligence Agency of the Department of Defense was in charge of this material.

Author Jim Schnabel described Alaska’s Mount Hayes as one of the major alien bases in his book “Remote Viewers” (1997). Former CIA director Stansfield Turner identified a remote viewer named Pat Price as “a man who could see what was going on anyplace in the world through his psychic powers.” Mt. Perdido (Spain), Mount Ziel (Australia), and Mount Hayes (USA) were four underground extraterrestrial bases, according to Price (Alaska).

The aliens who dwelt inside Mount Hayes were described by Price as having a human-like appearance, with the exception of their heart, lungs, blood, and eyeballs. He went on to say that the aliens employed thought transfer to manipulate our motor functions. Strange activity and malfunction of US and Soviet space probes were also blamed on the site.

In Episode 3 of Season 1 of “Missing in Alaska,” another surprising sighting was reported. A UFO was spotted hovering over Mount Hayes, and it was filmed from various angles by specialist cameras. “Like a helicopter, the strange item can hover, but unlike any known aircraft, it can also reverse course immediately.”

Hovering capabilities similar to a helicopter, yet unlike any known aircraft, it can also reverse direction instantly. It also shows no ramping up speed when moving from a stop, and the team determines its drop speed at the end, which is just over Mach one, based on its position relative to the mountain.”

The Japan Air Lines (JAL) freight flight 1628 (Boeing 747) was approached by three UFOs that tagged along with the plane for 50 minutes on November 17, 1986, making it one of the most famous UFO encounters in Alaska. The military radar captured this incident, and the Federal Aviation Administration (FAA) confirmed it. In addition, the US Navy transmitted to the FBI a classified three-page intelligence report titled “Unidentified Phenomena in the Vicinity of Kodiak, Alaska,” which documented several airborne objects seen by naval personnel in January 1950.

The oddness didn’t stop there. On August 14, 2003, B.J. Booth of the UFOCaseBook ufology website got a photograph of an alien entity along with an email headlined “Photograph shot by my granddad.”

The sender did not want to be identified since he did not want to participate in any research. He claimed that his grandfather took the shot in the early 1930s. “I know it looks like an alien or a Bigfoot,” he said, “and I know my grandfather told me the truth about capturing this image.” That is why I believe it should be in good hands. Please respect my privacy and don’t approach me about this because you’re the only one I’m sending this to.”

The creature was first spotted when the grandfather was on his way to a lake, according to the information written at the bottom of the image. He pursued the creature until he was near enough to snap this photo. Because the shot was taken in a remote, sparsely inhabited area, it took four months to develop. Last week, the sender received a photograph from his grandfather. His grandfather passed on the day after handing him the photo and telling him about his life.

Alaska is regarded as one of the oddest regions on the planet, whether it is due to UFO sightings or missing humans. 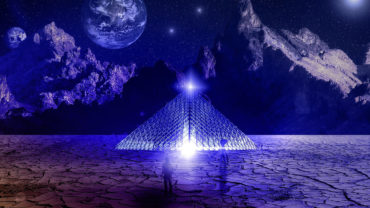