Claims suggesting there’s a massive face buried beneath the ice on Antarctica have gone viral. However, this is a clear example of Pareidolia–the tendency for the incorrect perception of a stimulus as an object, pattern, or meaning known to the observer.
Over the years, numerous weird things have been reported by news outlets around the globe, from Pyramids in Antarctica to crashed UFOs and secret alien and government bases.

One of the most famous conspiracy theories concerning Antarctica is the alleged supermassive, snow-topped pyramids lurking in “plain sight.” These apparent structures–which geologists say are no more than natural formations– are said to be the remnants of extremely ancient civilizations that inhabited Earth before our “civilization” came into existence.

Of course, physical evidence that supports the idea the Pyramids of Antarctica are real is nonexistent, probably because they are nothing more than mountains. Many other natural formations exist; many people tend to mistake them for actual, human-made pyramids.

Nevertheless, people have written and talked about them for years.

Antarctica’s Giant Face
People have now found a new thing to talk about. A giant face. And not just any significant beginning, but a massive alien look, which according to some theories, was left behind by a highly advanced alien civilization that worshiped aliens.

The grimacing face found thanks to Google Earth is supposedly carved into a remote region in southeast Antarctica, adding to the list of anomalies on the frozen continent.

The satellite image was first shared by an Instagram account known for promoting alleged UFO videos. UFO_Scandinava had uploaded a video showing a man zooming in and out of a satellite screenshot from Google Earth.

The area where the alleged “giant face” is located is strangely shaped, giving the impression that whatever is beneath it has eyes, a nose, and a mouth.

Another UFO/Conspiracy channel eventually picked up the image, this time on YouTube, this time called thirdphaseofthemoon.

The channel’s admins think that the supermassive face is highly ancient, possibly even a megastructure left behind by a long-gone civilization.

In a video where thirdphaseofthemoon reviews the giant face, one of the narrators asks where “this could be something that was left behind by the ancient civilizations that inhabited Antarctica in the past?”

They claim that the accelerated melting of ice in the continent reveals structures that have remained hidden from humanity for time immemorial.

And many people are convinced that the conspiracy theorists are onto something.

Among the many commentators on YouTube, one user wrote that the face is not natural and that nature isn’t possible to make stuff like that. The commentator argues the face resembles a Viking and has a metal helmet visible on top of the head.

Other users commenting on the YouTube video seemed more rational, saying that the alleged face is purely natural and entirely random, reminiscent of ice with many cracks.

But despite claims of alien races, lost civilizations, and massive faces buried beneath the ice.

That phenomenon is called Pareidolia, a strange effect that makes our brain see familiar shapes, structures, and even patterns where they do not exist.

Many images of Earth’s moon and even photographs of the surface of Mars are said to show evidence of lost civilizations, aliens, and secret bases.

But NASA has dismissed all of those as being Pareidolia.

According to the US Space Agency: “Pareidolia is the psychological phenomenon where people see recognizable shapes in clouds, rock formations, or otherwise unrelated objects or data.

“There are many examples of this phenomenon on Earth and in space.”

Pareidolia can genuinely do wonders. It can make you see traces of ancient alien civilizations on distant planets. 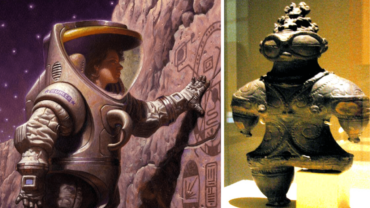