The picture below was taken in 1959 by a Belgian helicopter pilot, Col. Remy Van Lierde, while on patrol over the Congo. The snake he saw measured approximately 40 to 50 feet in length, dark brown/green with a white belly. It had triangle shaped jaws and a head about 3 ft x 2 ft. Experts have analysed the pictures and have verified them as authentic.

In 1959, while returning from a mission on his helicopter, Colonel Remy Van Lierde of the Belgian Airforce at the Kamina airbase in Belgian-occupied Congo, reported having observed a giant snake, as he flew over the forests in the Katanga region.

The snake is depicted by Van Lierde as nearly 50 ft. in length, with a 2 feet wide by 3 feet long triangular head. Should the estimation of Van Lierde be accurate, the creature would earn its place amongst the biggest snakes ever discovered. It even had dark green and brown top scales and a white belly, according to Van Lierde.

Upon sighting the reptile, Van Lierde immediately told his pilot to turn around and make another pass, at which the reptile reared up the frontal ten feet of its body head as if to strike, providing Van Lierde the chance to closely watch its white underbelly.

However, Van Lierde was worried that flying too low would let the helicopter be within striking range, so he had the pilot to resume his journey, leading to the creature never properly recorded, though there are documents claim that an on-board photographer managed to take this shot.

The unusual animal is believed to be either a giant oversized African rock python, a new species of snake entirely, or perhaps a descendant of the giant Eocene snake Gigantophis.

Remy Van Lierde was born on August 14th of 1915, in Overboelare, Belgium. He began his career in Belgian Airforce on September 16, 1935, as a fighter pilot who served during World War II in the Belgian and British Air Forces, shooting down six enemy aircraft and 44 V-1 flying bombs, and achieving the RAF rank of Squadron Leader.

Van Lierde was made Deputy Chief of Staff to the Ministre of Defence in 1954. In 1958 he became one of the first Belgians to break the sound barrier while test flying a Hawker Hunter at Dunsfold Aerodrome in England. He returned to the Belgian Air Force after the war and went on to hold several important commands before retiring in 1968. He died on June 8th of 1990. 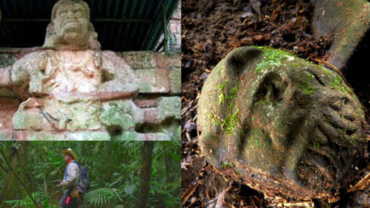