On an island off the coast of Sweden, archaeologists made a terrifying discovery at an old fort known as Sandby borg. The scene preserved, frozen in time, was an entire village of people who some unknown force of invaders had murdered. Skeletons were found murdered in old hallways, doorways, and all appeared to be in positions that suggested they were caught completely by surprise. 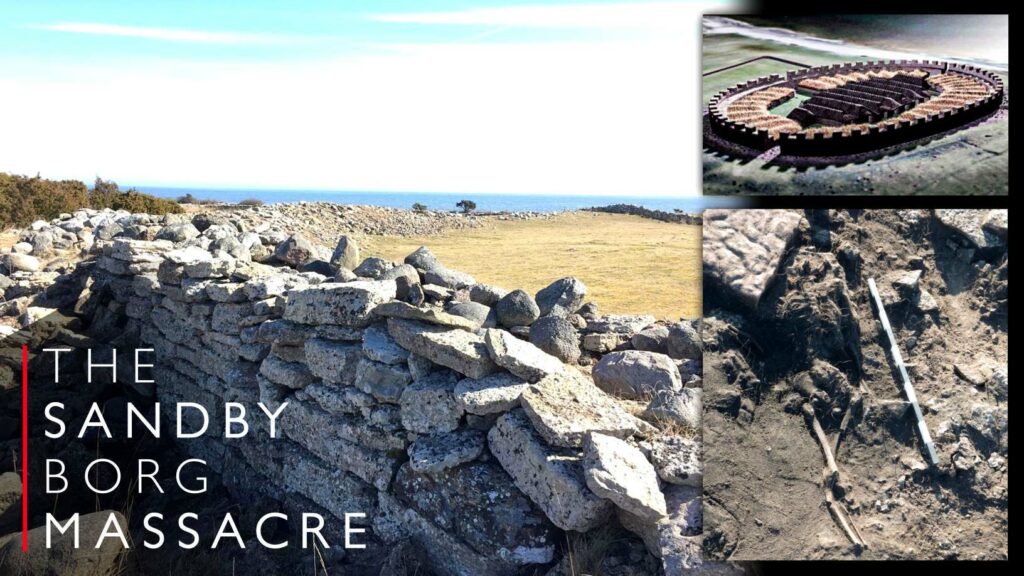 It appeared to be evidence of the most organized, clean hit of all time. The easy explanation is Vikings, but the people would have likely seen them coming on boats. Archaeologists also found lots of valuable jewels and riches, which indeed would have been taken by invading Vikings. The questions now haunt historians: Who wiped out this entire village so quickly and suddenly? And why didn’t they want the jewelry?

Discovery Of The Sandby Fort Massacre 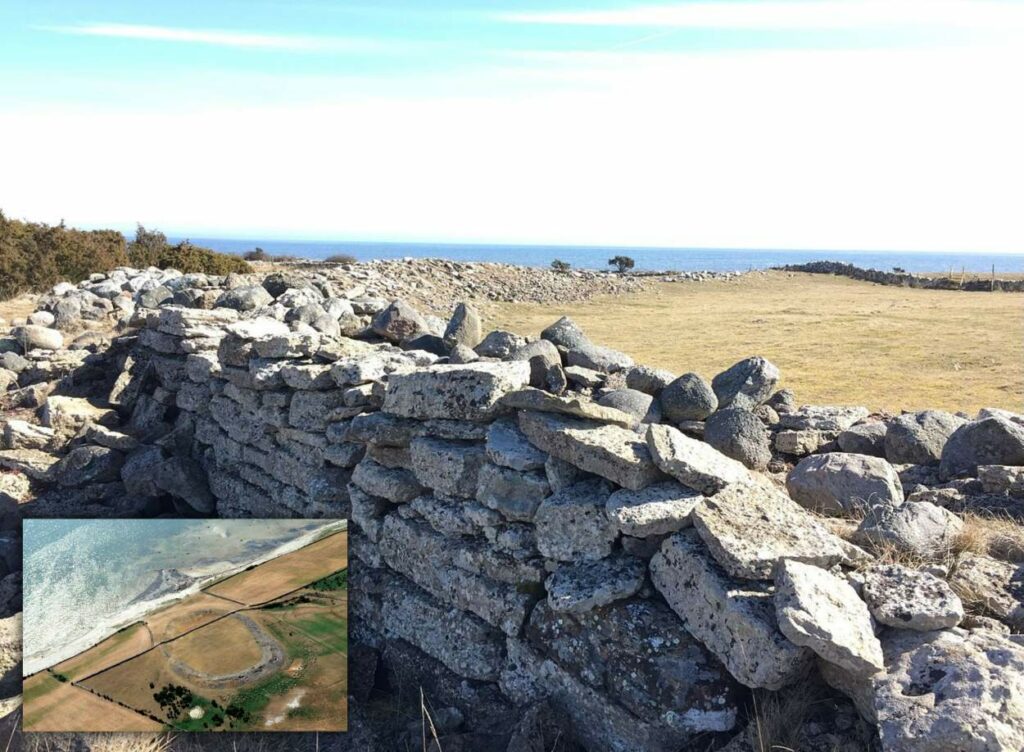 In 2010, archaeologists visited an island off the coast of Sweden after hearing about treasure hunters looting the archaeological site. Locals warned them to stay away from the green mound, where an ancient village had once stood. When they began to dig, they uncovered first one skeleton, then another, and then another. One had four goat’s teeth crammed into its open mouth. In one house, nine bodies were found. They didn’t die any normal death like in a natural disaster or epidemic. They were all brutally murdered!

In the April 2018 edition of the journal Antiquity, researchers revealed more details about the massacre, suggesting that it may have taken place not for plunder but because of politics.

The Massacre Of Sandby Borg

On a day like any other, the 5th-century residents of Sandby borg went about their business as usual. In this prosperous village on the island of Öland, off Sweden’s south-east coast, people ate a herring lunch or tended the hearth. Then disaster struck. 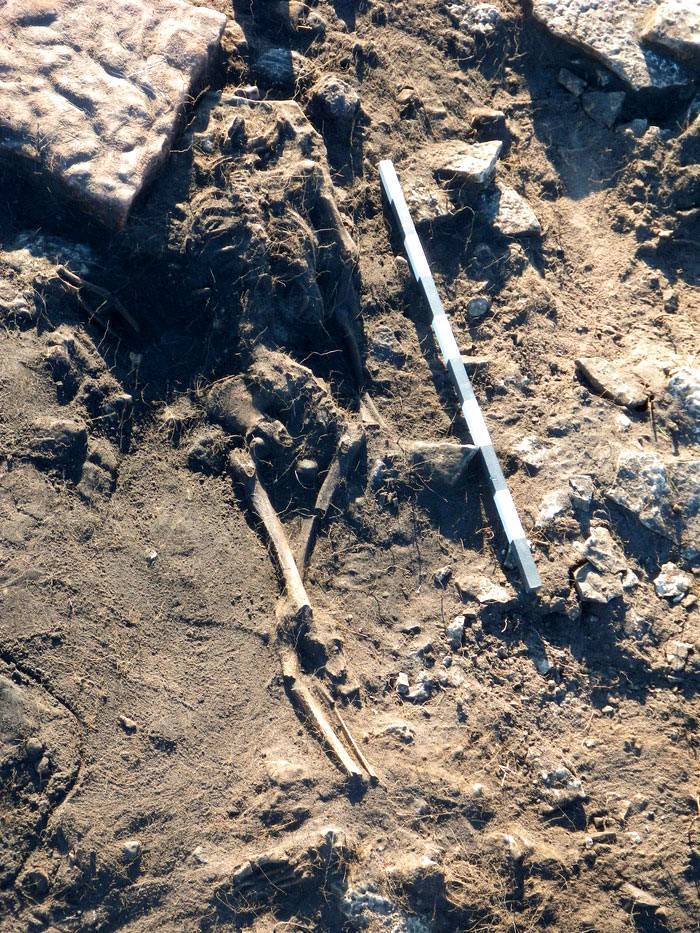 Mysterious assailants stormed the stone walls of the ringfort. Once inside, they slaughtered its inhabitants where they stood. Those who fled down the street or attempted to escape their homes were apprehended and killed. All in all, more than two dozen of people died. One was an old man who fell into the open fireplace after receiving a crushing blow to his skull. Another was a baby of just a couple of months old. For ages, their remains lay where they had fallen, unburied by their attackers and left to rot.

The houses were closed up, and the place was abandoned. It wasn’t looted after the murders, and neighbors on the densely populated island didn’t interfere with the site. Hence, archaeologists believe that the area was considered taboo years after the attack. As the turf walls of its houses collapsed, Sandby borg became a shallow grave, with bones concealed just inches below the surface.

They uncovered five different jewelry stashes from houses at the center of the fort. The caches include silver brooches and bells, gold rings, and amber and glass beads. Even cowrie shell fragments were pierced to be strung on a necklace. The deposits weren’t randomly placed. Each one was buried just inside the doorway of a house, to the left of the door. Researchers believe that the women of the fort buried their valuables in predesignated spots.

Most of the skeletons unearthed from the Sandby borg ringfort showed that people were attacked from behind or the side. The victims also lacked defensive wounds on their arms, suggesting that the conflict was less of a fight and more execution.

So far, the team has excavated less than 10 percent of the site and investigated only a fraction of the 53 houses. They think hundreds of skeletons remain to be unearthed. But from their work, they have learned about the inhabitants of the ringfort.

When Was Sandby Borg Built?

Built around 400 AD, the Sandby borg encircled an area the size of a football field. The site is one of more than a dozen similar “borgs,” or forts, on Öland, all built during the Migration Period, a tumultuous era in Europe that began in the fourth century AD and hastened the collapse of the Roman Empire. 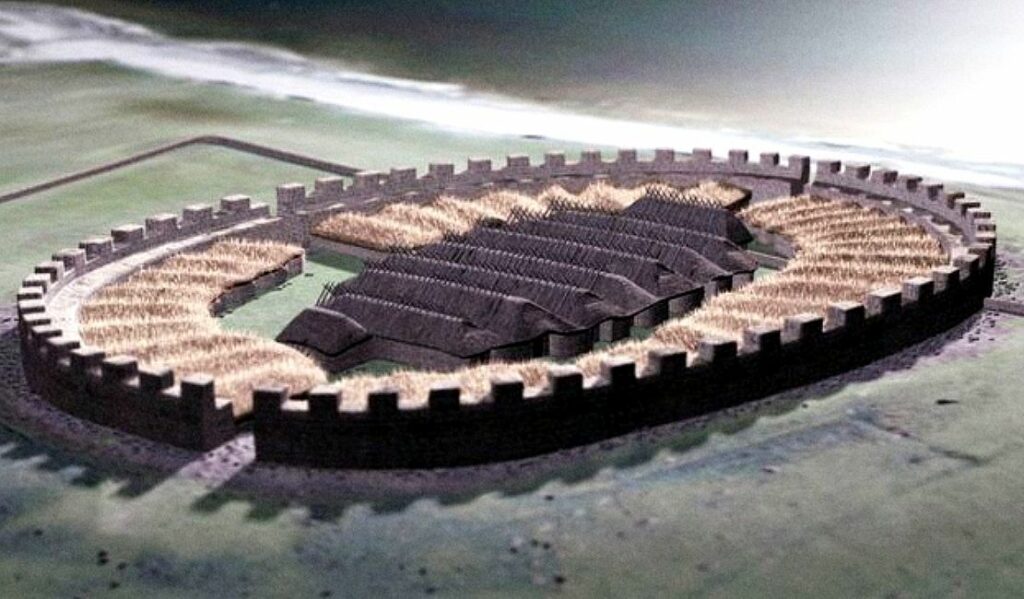 The forts were like safe rooms in case of a siege or surprise attack and could be reached within a few minutes at a dead run from surrounding farms. Sandby borg’s 15-foot-high ramparts once protected 53 houses and their stores of food. What remains of Sandby Fort’s walls now cover a flat expanse of grass and aren’t even tall enough to break the strong winds.

Öland must have been a risky and possibly terrifying place to live — it has a seemingly endless coastline for seaborne raiders to land on and no natural barriers to slow down attackers. Even today, the island can be a strange, forbidding place. Twenty times bigger than Manhattan, it is flat, windy, and barren. Yet, none of this has stopped people from settling there. The earliest signs of human habitation date back millennia, and the island is still dotted with Bronze Age burial mounds and Viking runestones. 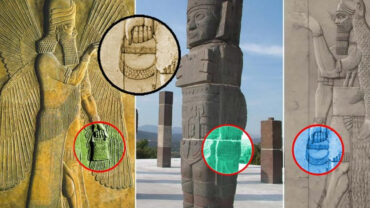