In 2015, a submerged, 39-foot-long monolith was discovered in the waters off the coast of Sicily at a depth of about 130 feet. This archaeological find which resembles the enigmatic structure of Stonehenge, could rewrite the history we know. 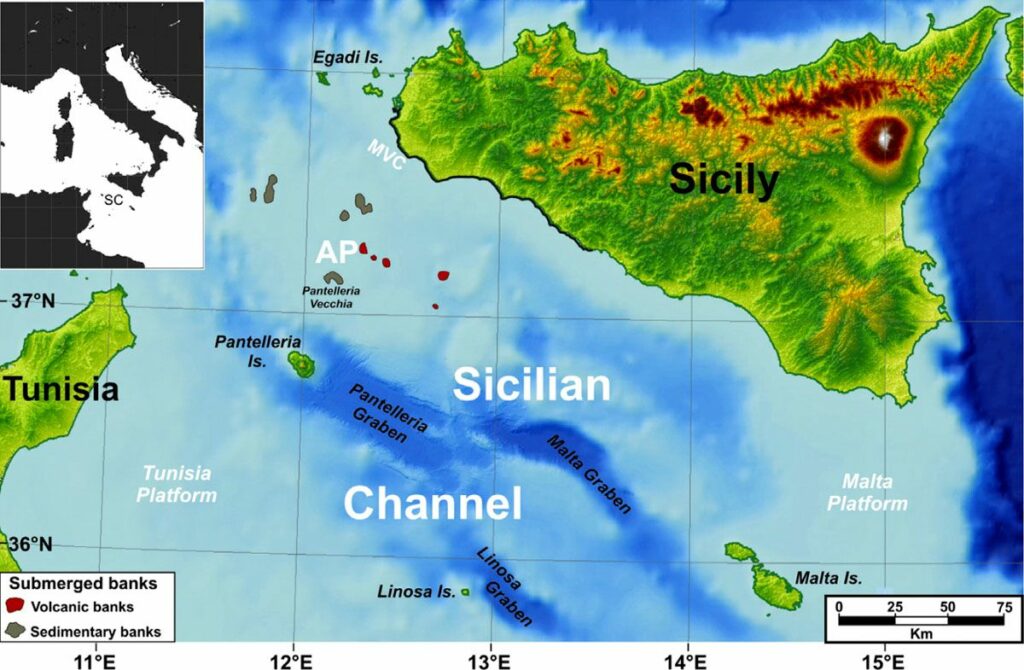 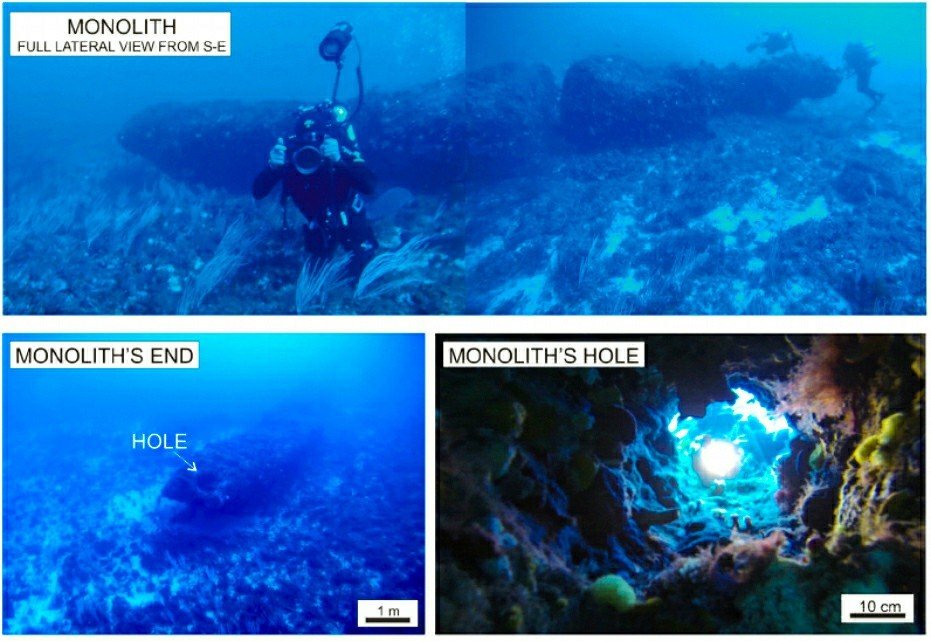 The artificial monolith found in the Mediterranean Sea is at least 9,350 years old. It weighs about 15 tons and is broken into two parts. It has three regular holes of similar diameter: one that crosses it entirely on its top and another two at two sides of the monolith. 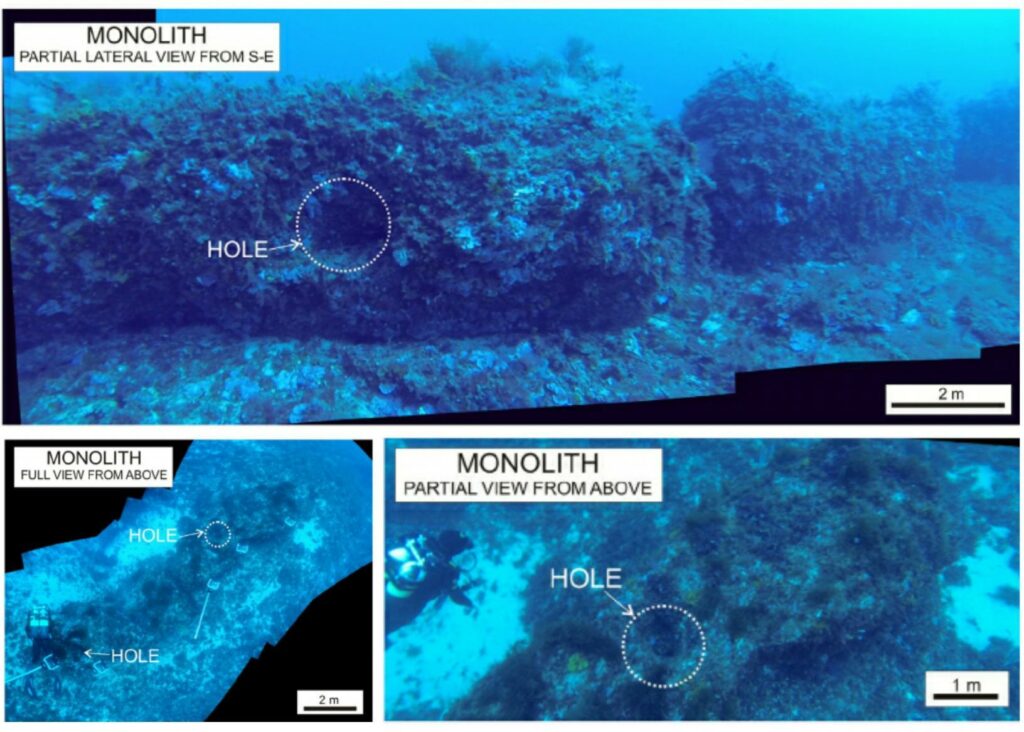 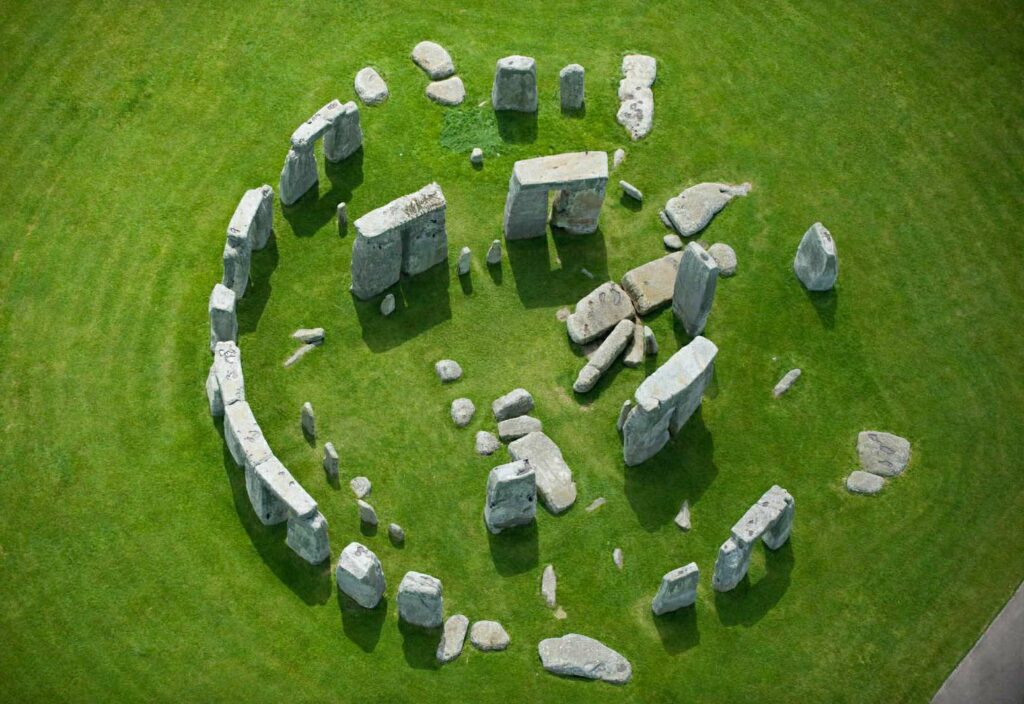 The prehistoric Stonehenge monument in Wiltshire, England, consists of a ring of standing stones, each around 13 feet high, seven feet wide, and weighing around 25 tons. The famous Neolithic monument is aligned to the sunset of the winter solstice and the sunrise of the summer solstice and is thought to have been used by ancient people to survey the heavens.

Stonehenge is perhaps the world’s most famous prehistoric monument. It was built in several stages: the first monument was an early henge monument, built about 5,000 years ago. The unique stone circle was erected in the late Neolithic period, about 2500 BC.

It is thought that the monument was also a meeting point for ancient people and may have been a religious site at which people worshiped their ancestors. Some have suggested it was a place of the dead, while others say it was a place of the healing because the bluestones could be struck to make a noise thought to have mystic or healing powers.

What did the archaeologists who discovered the Sicily-henge monolith say about it? 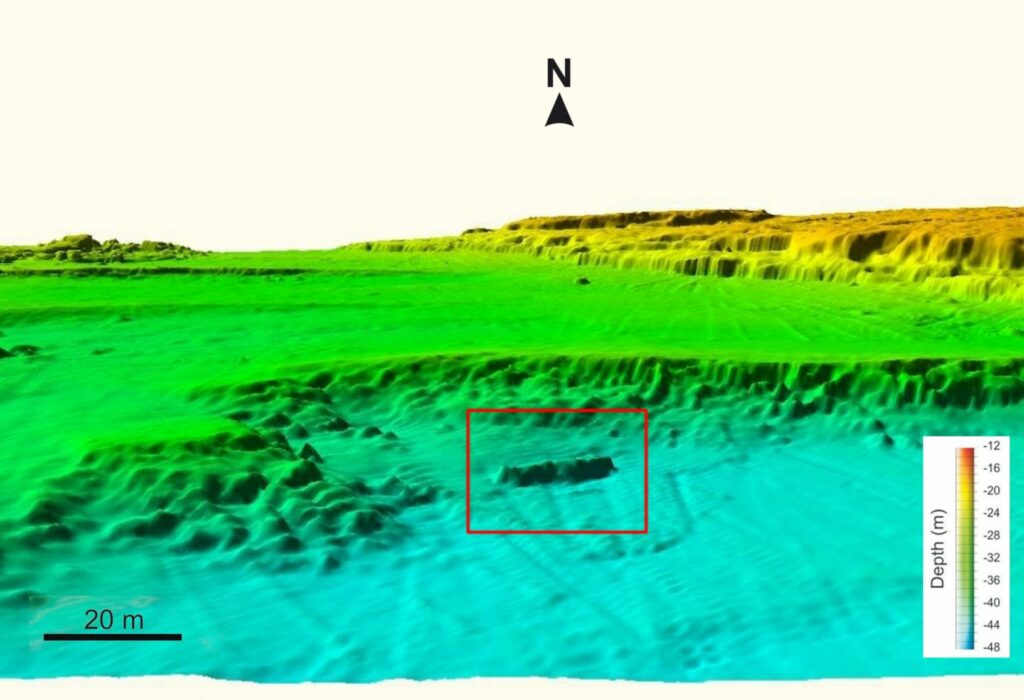 There are no reasonable known natural processes that may produce these elements, according to Dr. Emanuele Lodolo from the National Institute of Oceanography and Experimental Geophysics in Italy and Dr. Zvi Ben-Avraham from the University of Haifa and Tel Aviv University in Israel, who found the monolith.

“The monolith is made from stone other than those which constitute all the neighboring outcrops and is quite isolated concerning them,” the scientists said.

“It is composed of calcirudites of Late Pleistocene age, as determined from radiocarbon measurements conducted on several shell fragments extracted from the rock samples.”

The monolith was found on the Pantelleria Vecchia Bank, a former island of the Sicilian Channel. The island, according to the archaeologists, was dramatically submerged during a flood around 9,300 years ago.

“The obtained age falls chronologically within the beginning of the Mesolithic period of SE Europe and the Middle East,” Dr. Lodolo and Dr. Ben-Avraham said.

“The discovery of the submerged site in the Sicilian Channel may significantly expand our knowledge of the earliest civilizations in the Mediterranean basin and our views on technological innovation and development achieved by the Mesolithic inhabitants.”

“The belief that our ancestors lacked the knowledge, skill, and technology to exploit marine resources or make sea crossings must be progressively abandoned,” the archaeologists said.

“The recent findings of submerged archaeology have definitively removed the idea of technological primitivism often attributed to hunter-gatherers coastal settlers,” the archaeologists concluded.

Who were the islanders that built the monolith?

This is true that the Stonehenge-style monolith of Sicily could shed light on the earliest civilizations, which called the Mediterranean basin home. It is unknown whether the Mediterranean monolith stood alone or as part of a group, as seen at Stonehenge, which is much younger, constructed in around 2,600 BC.

Today, little is known about the people who lived on Pantelleria Vecchia Bank in the Sicilian Channel some 10,000 years ago. However, the construction of the stone shows they were skilled workers, able to extract, cut, and transport a huge rock.

Experts believe the people traded fish they caught with other islands. The stone may have served as a primitive kind of ‘lighthouse’ or local beacon or even a place to tie and anchor fishing boats. However, its hugeness doesn’t convince us much that it was a place to land fishing boats at the time. If so, how big their boats were is a matter of concern.

The island was submerged during a flood 9,500 years ago, after the Last Glacial Maximum. This was the last period in the Earth’s climate history, during the last glacial period when ice sheets were at their most prominent.

The Sicilian Channel is one of the shallow shelves of the central Mediterranean region where the consequences of changing sea level were most dramatic and intense. The ancient geography of the Mediterranean Basin was profoundly altered by the increase in sea level following the Last Glacial Maximum.

The monolith’s discovery suggests that a prehistoric civilization thrived on the island. Ancient people may have colonized others nearby because this discovery provides evidence for a significant Mesolithic human activity in the Sicilian Channel region.

The radiocarbon dating of shell fragments extracted from the monolithic stone indicates the stone itself to be 40,000 years old, while the ocean floor surrounding the monolith is 10 million years old. This suggests that the megalith may have been carved from imported stone. 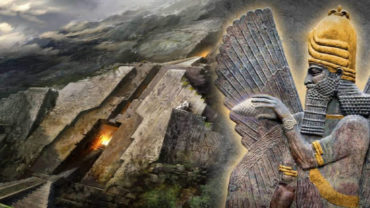