Egypt was still the main attraction for archaeologists looking for answers in 1935. It had only been a decade since Howard Carter, a British Egyptologist, discovered Tutankhamen’s tomb on November 4, 1922, after it had remained largely undisturbed for over 3,000 years. That is yet another incredible story that needs to be explored. However, our attention is being drawn to the most recent attempt to conceal the true ancient history of an unknown civilization that left us with enormous wonders both above and below the Giza Plateau’s sands. 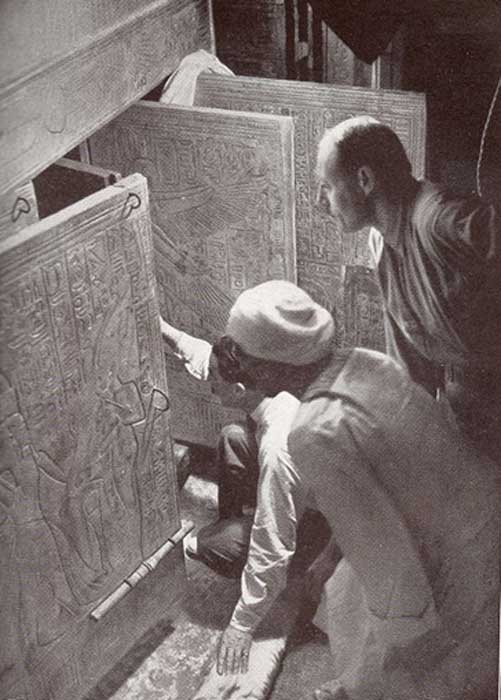 In the first week of March 1935, the first reports of a “Secret City” appeared in the World Press. By July of that year, much more had been discovered, and the Sunday Express published a piece by Edward Armytage. He had recently returned to England from Egypt, where he had witnessed the excavation of a 4000-year-old Egyptian metropolis. 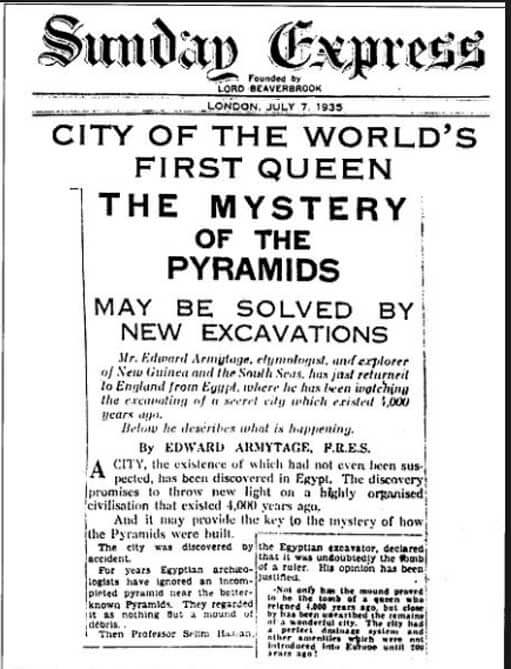 Then there was silence as if every surviving Egyptologist had lost interest in this fantastic underground metropolis. Their subsequent publications focused on queens’ graves and shafts that had sunk deep into the ground to serve as burial tombs somewhere during the 24th Dynasty, which lasted from 732 BC to 716 BC. Such a monumental find of an entire underground metropolis dating back at least 4,000 years was wholly overlooked in favor of a late-period Dynasty that went practically unnoticed.

That was eighty years ago, and today we face a similar ‘rose granite block wall’ in the form of Zahi Hawass. Egypt’s former Minister of State for Antiquities Affairs, who held the position until Egypt’s revolution in 2011, toppled Hosni Mubarak—and ended Hawass’ controversial reign as Egypt’s supreme chief of antiquities. He does, however, still have his finger in the pie.’ Much has been written about the Egyptian’ Indiana Jones,’ who, when confronted with an unwanted inquiry, flashes a broad smile one moment and red-faced wrath the next. In their book “Breaking the Mirror of Heaven,” Robert Bauval and Ahmed Osman detail this aspect of his personality.

However, such a temperament doesn’t duly explain why Zahi Hawass has publicly announced that there is nothing below the Sphinx. There have many photos of him entering descending shafts from the head of the Sphinx and at the far rear of the Lion Body. Are we supposed to forget entirely what we have seen several times in the past and accept such denials without question?

Then there was silence as if every surviving Egyptologist had lost interest in this fantastic underground metropolis. Their subsequent publications focused on queens’ graves and shafts that had sunk deep into the ground to serve as burial tombs somewhere during the 24th Dynasty, which lasted from 732 BC to 716 BC. In favor of a late-period Dynasty that went virtually ignored, such a significant find of an entire underground metropolis dating back at least 4,000 years was overlooked entirely.

He reportedly dismissed inquiries about underground tunnels beneath the Giza Plateau and chambers beneath the Sphinx by claiming that looking deeper was impossible since the rooms were sealed or full of water. That could be the case, yet one of the photographs showing a rear descending shaft from the Sphinx’s side shows that the ground below is arid.

We know that Hawass descended staircases from the Sphinx’s rear entrance into a deep chamber on a middle layer and then even lower down to a bottom section, which had an enormous sarcophagus and was filled with water. These moments were all captured on a Fox documentary video. It isn’t easy to comprehend how he could ever believe he could afterward deny everything he had accomplished previously.

The Sphinx’s Head Has a Hole 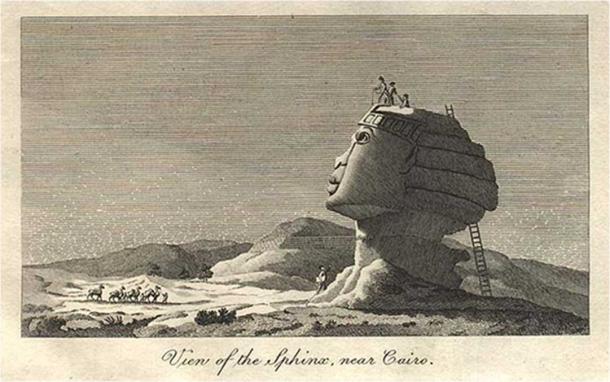 Vivant Denon etched an image of the Sphinx around 1798. However, he didn’t exactly copy it. He had sketched a picture of a guy being taken out, so he must have known there was a hole on the top of its head.

The sketch cannot be used as proof; an aerial photograph of the Sphinx taken from a hot air balloon in the 1920s revealed that there is an aperture on the top of its head.

The Head of the Sphinx Is a Mysterious Enigma

The Sphinx’s head and face must have been changed from their original shape long after the monument was first carved, based on different construction materials and colors. We believe it is not rock but some artificial substance, compared to its limestone and eroded body. In comparison to its body, the skull has almost no erosion. 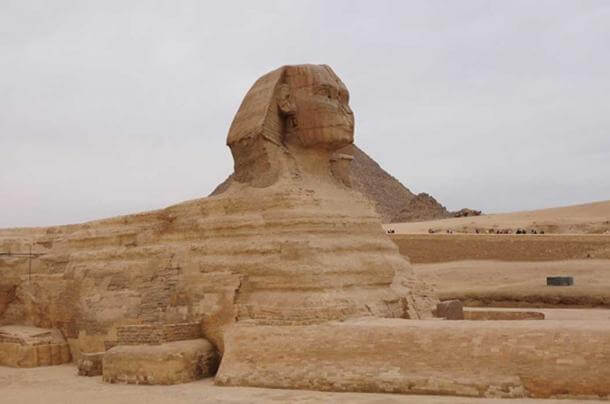 The sides of the headdress are smooth, and all we have to do is look at the mythological creature to notice the lighter color of the body compared to the dark of the head.

According to Tony Bushby’s book “The Secret in the Bible,” a poorly fragmented Sumerian cylinder offers a story about a beast with a lion head and a tunnel entrance buried by sand that may quickly have happened at Giza. Everything currently indicates the Sphinx body being carved out of natural stone during a period of frequent severe rainfall, which corresponds to the period Robert Bauval and Robert Schoch calculated for constructing the Orion’s Belt Pyramids, i.e.,,, around 10,450 BC.

Sphinxes on both sides?

From as early as 1665, there have been sketches of the Giza (the term Gisa in Ancient Egyptian means’ Hewn Stone’) complex, with two heads peering out of the dunes, one with feminine features.

It was common practice in ancient Egypt to engrave two lions, known as Akerw, next to gateways for divine protection, and this would lead us right to a mound beside the Sphinx, which Gerry has discovered measured. Could a second sphinx’s body be buried beneath this mound? 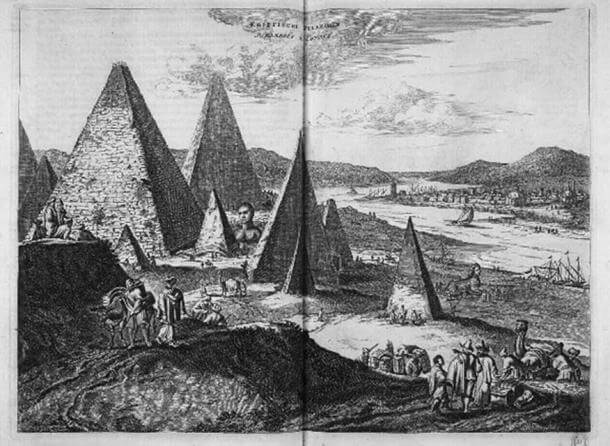 According to a credible source, Hawass and Mark Lehner refused to listen to his theory, even though this mysterious, enormous, covered shape close to the Sphinx would have piqued the Egyptian rulers’ interest.

Gerry had contacted someone at a prestigious Cairo institute who had equipment that could identify items beneath the sand.

That person applied for a permit to explore the mound with the then-Supreme Council of Antiquities, but they did not react. No one else appears to have been permitted to study the exact bank section where we believe a Second Sphinx could be discovered. They had to have a reason for it.

What’s the Deal with the Denial?

Why would those two Egyptologists be so frightened by the idea that something had been overlooked for centuries? Is it possible that there’s something hidden beneath that mound that they don’t want to reveal? It seems incomprehensible that anyone would protest so strongly to any probe or even a simple aerial snapshot being taken which could lead to the discovery of yet another great wonder of the world, attracting tens of thousands of tourists to Egypt. They won’t even acknowledge looking at the mystery mound, even though they would have been the first to say so if they did.

Zahi Hawass met with the Foreign Press Association in Cairo a few years ago to express his displeasure with a group of pseudo-scientists whose personal attacks on television and other media had escalated to being frightening. He was concerned that an NBC interview would help to publicize and support their views, which he claims were just for personal gain.

In a statement, he is believed to have said:

“I’d like to talk about things that don’t make sense,” she says.

His gesture indicated his growing anger with what he referred to as “pyramidiots” — people who hold ideas opposed to those held by the scientific community.

“It’s been said that covert excavations are surrounding the Sphinx that isn’t being revealed.” This is not the case.”

Zahi Hawass is not only a fantastic performer and possibly the world’s foremost expert on ancient Egypt, but he has also done a lot to promote tourism in his nation. He does, however, appear to have a goal, which is to maintain the traditional knowledge of ancient Egyptian history, regardless of how many fresh discoveries contradict what is generally thought to be accurate. 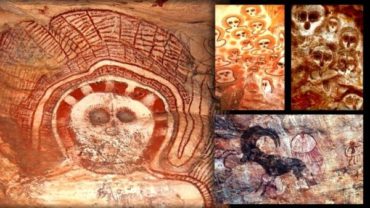