Maria Orsitsch, also known as Maria Orsic, was a famous medium who later became the leader of the Vril Society. She was born on 31. October 1895 in Zagreb. Her father was a Croatian and her mother was a German from Vienna.

The Mystery of Maria Orsitsch
Maria Orsitsch was first mentioned and pictured in 1967 by Bergier and Pauwels in their book: “Aufbruch ins dritte Jahrtausend: von der Zukunft der phantastischen Vernunft.” Maria soon followed the German national movement which was active after the WWI, a movement whose objective was territorial and political accession to Germany. In 1919 she moved to Munich with her boyfriend and fiancé. It is not known whether they were married or not, since both disappeared in 1945. 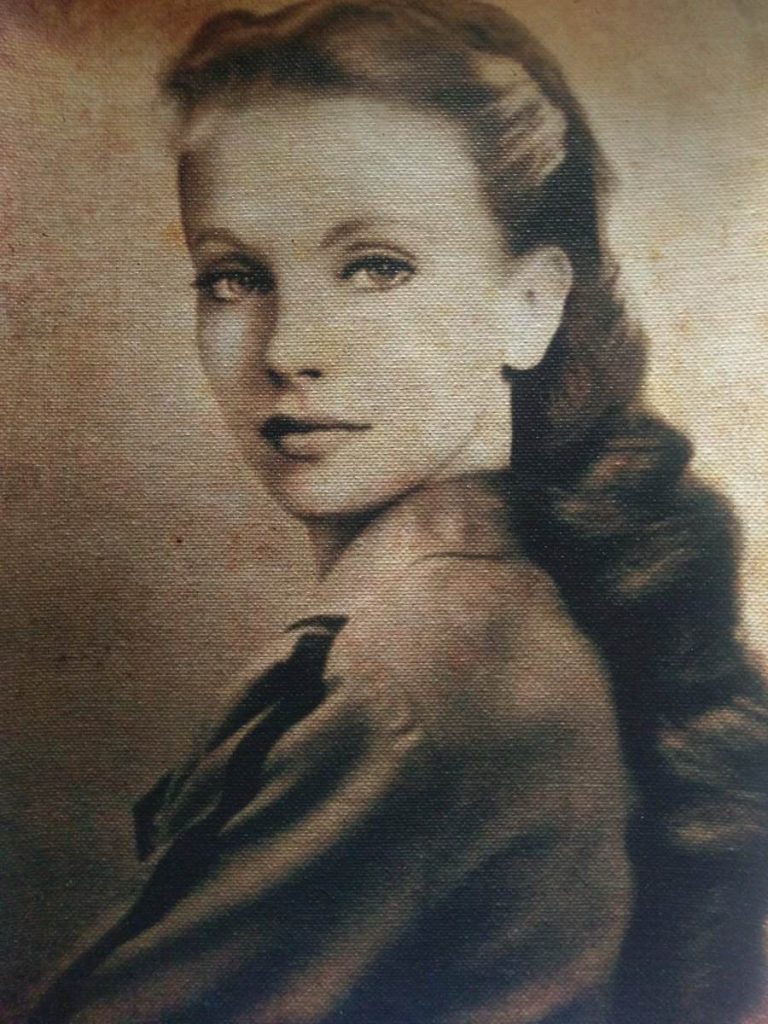 In Munich, Maria was in contact with the Thule Society from the beginning and soon created her own inner circle with Traute A, another Munich medium, and other friends. This group was called “Alldeutsche Gesellschaft für Metaphysik”, the official name of the Vril Society.

All of them were young girls, although somewhat peculiar since they were staunch opponents of the new fashion for short hair among women. Both Maria and Traute had very long hair, one blonde and the other brown. They wore very long pigtails, a very rare hairstyle in the early 20th century.

As expected, this soon became a characteristic of all the women who made up the so-called Vril Society, which is said to have existed until 1945. And it was not by sheer whim, since they firmly believed that their long manes acted to cosmic antenna mode to receive communications outside our world.

On the other hand, in public, they never exhibited their hair in a ponytail but preferred to wear it down to attract less attention. As identification, the members of the Vril Society, also called “Vrilerinnen” carried a disc that represented two of the most important mediums of the group: Maria Orsic and Sigrun.

In December 1919, a small group of people from the Thule, Vril and DHvSS (acronym for Men of the Black Stone) Societies, including Maria and Sigrun, rented a small cabin near Berchtesgaden (Germany).

Maria, then, affirms that she has received a series of mediumistic transmissions in a kind of writing that she calls “Templar-Germanic”, in a language that she claims she does not know, but that they contain information of a technical nature for the construction of a machine flying. Supposed documents belonging to the Vril Society mention that said telepathic messages come from Aldebaran, 68 light-years away, in the constellation of Taurus.

As for the documents, it is said that Maria had two piles of papers resulting from these telepathic trances: one with the unknown handwriting and the other perfectly legible. As for the latter, Maria suspected that it might be written in an archaic form of what might be a Near Eastern language.

With the help of a group close to the Thule Society known as the “Pan-Babylonianists”, made up of Hugo Winckler, Peter Jensen and Friedrich Delitzsch among others, they were able to find out that this language would be none other than ancient Sumerian, the language of the founders of ancient Babylon. Sigrun helped to translate the message and in the process to decipher the strange images of the circular flying artefact that appeared in the other pile of papers.

The concept of the many things that are put into the “alternative science” drawer, matured in these years and in those that were to come immediately afterwards. The fact is that, due to financing difficulties, the project for the construction of said flying apparatus took three years to get underway. Supposedly, by 1922, different parts of the prototype had been independently manufactured in various factories financed by the Thule Society and the Vril Society.

At the end of November 1924, Maria visited Rudolf Hess in his Munich apartment together with Rudolf von Sebottendorf, the founder of the Thule Society. Sebottendorf wanted to contact Dietrich Eckart, who had passed away the previous year. Eckart had translated Ibsen’s plays into German and published the magazine “Auf gut Deutsch”; he was also a member of the Thule Society. In order to contact Eckart, Sebottendorf, Maria, Rudolf Hess, and other Thule members clasped their hands around a table covered in black cloth. 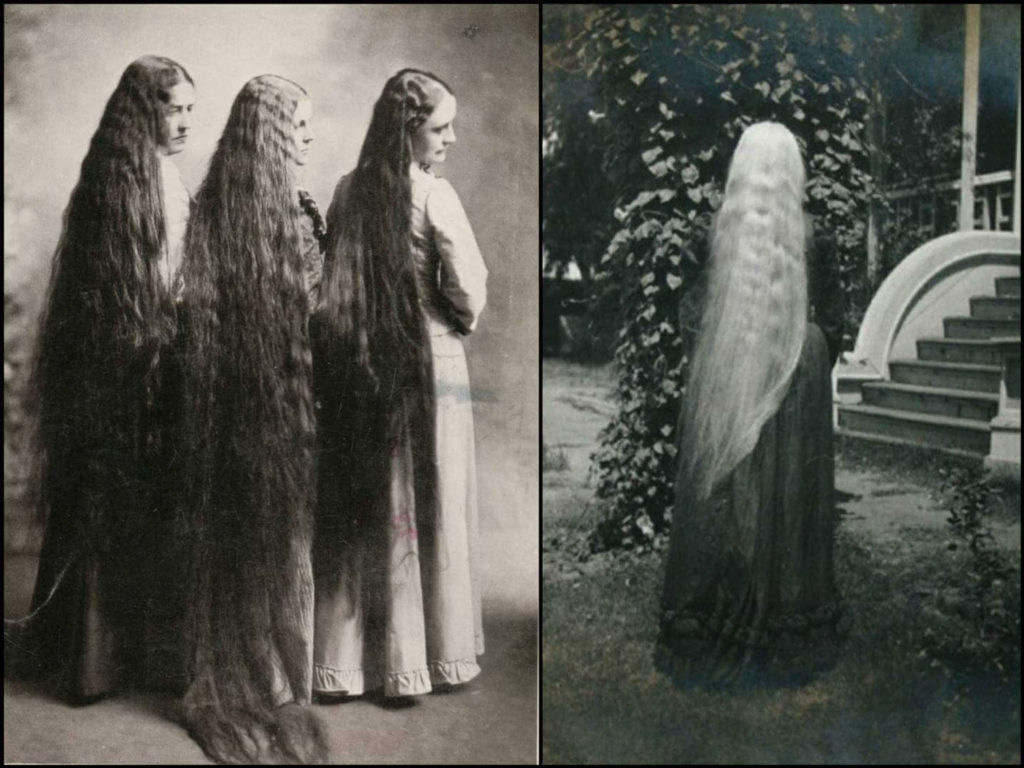 Hess began to feel uncomfortable having to see how Maria went into a trance and the orbits of her eyes moved backwards, revealing only the white of these and having to bear seeing her consume in spasms sitting in the chair with an unpleasant grimace in her mouth. Instead, Sebottendorf was satisfied to see how Eckart’s voice began to emerge from the lips of the medium. But something unexpected happened. Eckart announced that he was being forced by someone or something to leave room for another voice to manifest through the medium with an important message.

Eckart’s voice disappeared to give rise to a disturbing and unpleasant voice that identified itself as “the Sumi, inhabitants of a distant world that orbits the star Aldebaran in the constellation that you call Taurus, the Bull.” None could help but look at the other companions with wide eyes due to the surprisingness of what was happening. Supposedly, according to the strange voice, the Sumi were a humanoid race that would have colonized the earth 500 million years ago. The ruins of Larsa, Shurrupak and Nippur in Iraq would have been built by them.

Those who survived the great flood of Ut-napishtim would have become the ancestors of the Aryan race. Sebottendorf, skeptical of such information, demanded evidence. While Maria was still in a trance, she scribbled a series of lines on which some Sumerian characters could be seen. 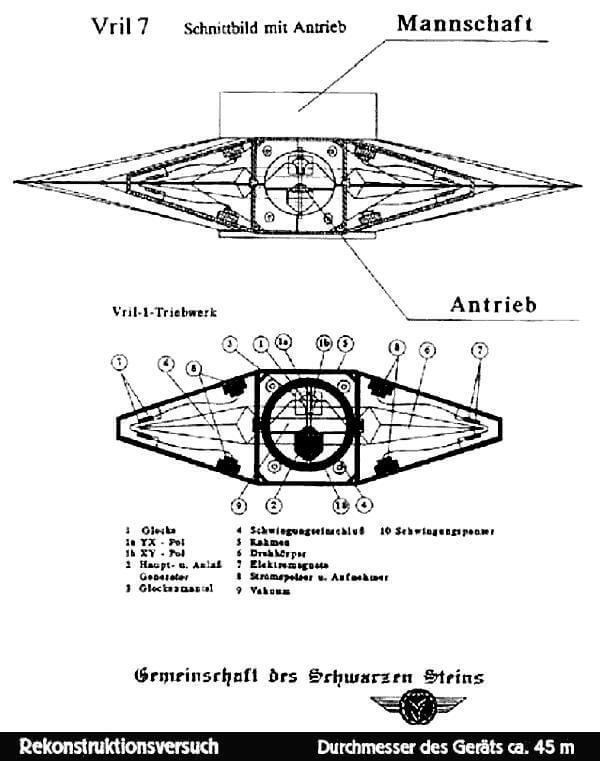 In December 1943, Maria and Sigrun attended a meeting organized by the Vril Society on the seashore in Kolberg. Supposedly, the main objective of this meeting was to debate the “Aldebaran Project”. The mediums of the Vril Society would have received telepathic information about habitable planets around Aldebaran and planned to travel there.

Apparently, this project was discussed again on January 22, 1944, in a meeting between Hitler, Himmler, Dr W. Schumann (scientist and professor at the Technical University of Munich) and Kunkel of the Vril Society. It was decided that a prototype Vril 7 “Jäger” (hunter in German) would be sent through a supposed dimensional channel outside the speed of light in the direction of Aldebaran.

According to the writer N. Ratthofer, the first test back on this dimensional channel took place in late 1944. The test almost ended in disgrace because, after the flight, the Vril 7 looked as if it had been flying for hundreds of years. , and not only because of its appearance but also because it also had damage to many of its components.

Maria Orsic lost track of her in 1945. On March 11, 1945, a supposed internal document of the Vril Society was sent to all its members; a letter written by Maria Orsic.

The letter ends by saying: “niemand bleibt hier” (no one is here). This would be the last communication sent by the Vril Society and since then no one has heard from Maria Orsic or any of its other members. Many continue to believe that they fled to Aldebaran. 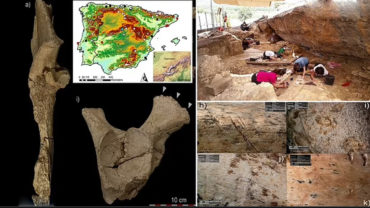