When archaeologists found a tunnel under Mexico’s ‘birthplace of the gods, they could only dream of the riches they would discover. Now its wonders – from jewel-eyed figures to necklaces of human teeth – are being revealed to the world. 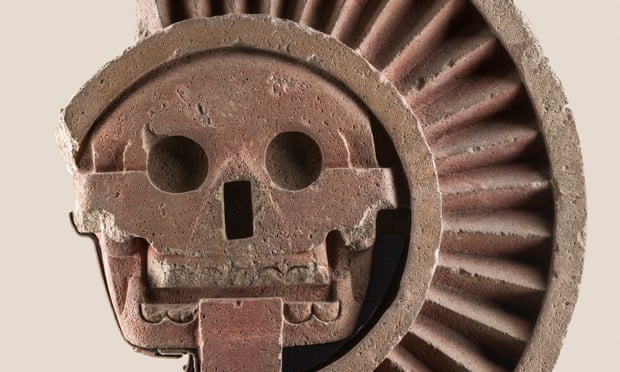 In 2003, a tunnel was discovered beneath the Feathered Serpent pyramid in the ruins of Teotihuacan, the ancient city in Mexico. Undisturbed for 1,800 years, the sealed-off passage was found to contain thousands of extraordinary treasures lying exactly where they had first been placed as ritual offerings to the gods. Items unearthed included greenstone crocodile teeth, crystals shaped into eyes, and sculptures of jaguars ready to pounce. Even more remarkable was a miniature mountainous landscape, 17 meters underground, with tiny pools of liquid mercury representing lakes. The tunnel walls were found to have been carefully impregnated with powdered pyrite, or fool’s gold, to give the effect in the firelight of standing under a galaxy of stars.

The archaeological site near Mexico City is one of the largest and most important globally, with millions of visitors every year. This was its most exciting development for decades – and the significance of these discoveries is explored in a major exhibition opening this month at the de Young Museum in San Francisco. 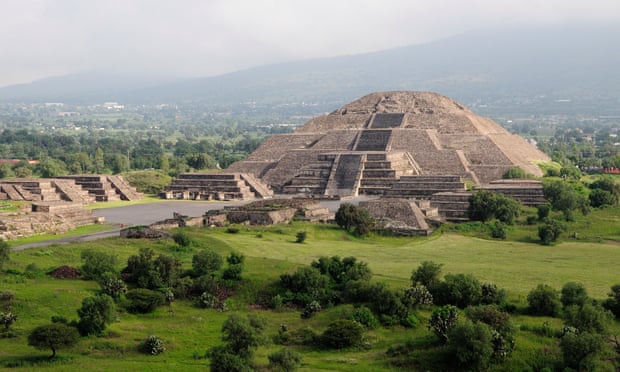 Teotihuacan has long been a place of mysteries. It was the most populous city in the Americas nearly 2,000 years ago, but little is known about its language, rulers, or the circumstances of its collapse, in around AD550. Its name, which means “birthplace of the gods,” was given much later by the Aztecs, who treated the ruins – including the monumental Pyramids of the Sun and Moon and the majestic Avenue of the Dead – with due reverence.

Many questions remain unanswered, but the newly discovered tunnel has led to a greater understanding of the design and mythology of Teotihuacan, which was a sacred place as well as a bustling metropolis. The de Young exhibition and showcasing artworks from numerous collections offer the latest theories about the mysteries that still surround it.

The tunnel was chanced upon by Mexican archaeologist Sergio Gómez Chávez. After days of heavy rain, he noticed that a sinkhole – a danger to tourists – had opened up near the foot of the Feathered Serpent pyramid. He shone a torch in but could see only darkness, so he tied a rope around his waist and was lowered by workers down the hole, which with surprise, he realized was a perfectly cylindrical shaft.

There was, he recalls, a sharp stench that was nearly unbearable, but at the bottom, he peered through a gap in the rubble to see an underground passage, evidently an ancient construction. Work proceeded cautiously: before a dig began, his team used a robot with a video camera to explore the tunnel, which turned out to be as long as a football field, passing below the nearby great plaza as well as the pyramid. “We were amazed by what no one had seen for at least 1,500 years,” says Gómez Chávez in the show’s catalog. At one end, the passage opened out into three chambers containing riches worthy of a quest by Indiana Jones. 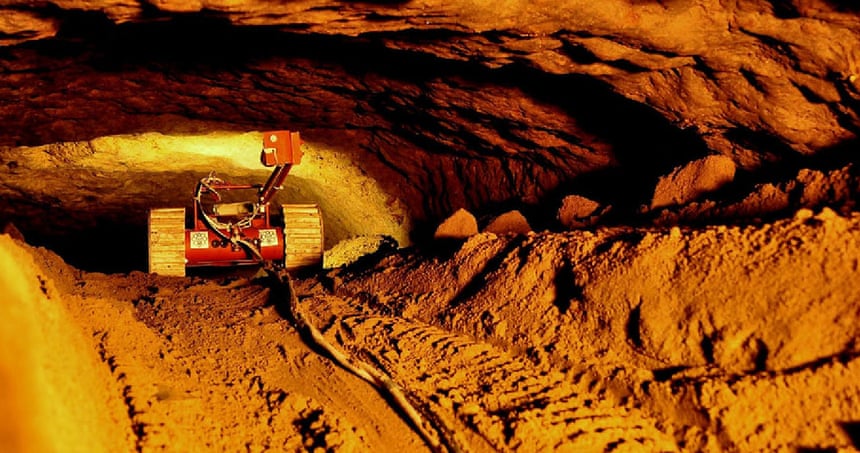 The vast Pyramids of the Sun and Moon are different from ancient Egypt, being temples rather than tombs. The Street of the Dead connects them as part of an urban grid, the whole pattern oriented to the sun’s movement. The city’s very design contains the idea of it being “the birthplace of the gods” – where the universe was thought to have begun. Watermarks along the walls of Gómez Chávez’s passage have proved that the huge plaza above it was deliberately flooded to create a kind of primordial sea, with pyramids as metaphorical mountains emerging from the water at the beginning of time. Thousands of people would have witnessed ceremonies re-enacting the creation myth.

The inhabitants of the city, along with those from similar civilizations, believed the universe had three levels, connected by an axis: the celestial plane, the earthly plane, and the underworld, which wasn’t the Biblical place of fiery punishment but a dark, watery realm of creation, with lakes and mountains – it signified riches and rebirth as well as death. The rich array of objects Gómez Chávez has brought up from the passage – large spiral shells, beetle wings arranged in a box, hundreds of metal spheres – was left there like a treasure to appease the gods. But it also seems that the tunnel, with its pyrite galaxy and liquid mercury lakes, was itself a re-creation of the underworld.

Most remarkably, at the end of the passage, Gómez Chávez’s team uncovered four greenstone statues, highlighting the de Young show. They are wearing garments and beads, and their open eyes would have shone with minerals. Two were still in their original positions, leaning back and gazing up at the axis where the three planes of the universe meet: these are the founding shamans of Teotihuacan, who guided pilgrims to the sacred place. They carried bundles of holy objects used to perform magic, including pendants and pyrite mirrors, seen as portals to another realm. 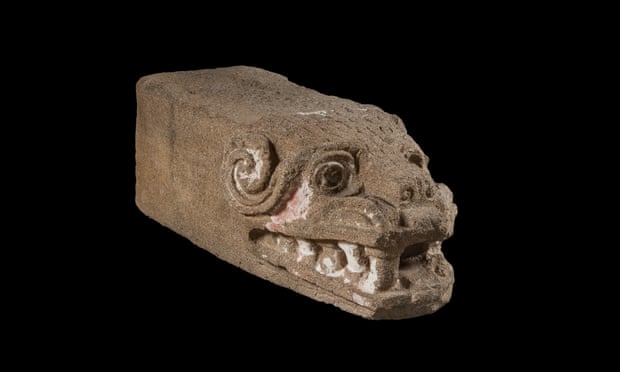 Other major Teotihuacan discoveries from the past few decades are represented in the show. A court is now thought to have existed near the plaza, where residents would have played the Mesoamerican equivalent of racquetball. In the 1980s, human sacrifice was found inside the Feathered Serpent pyramid. More than 100 warriors, kneeling with their hands bound behind their backs, are believed to have died there. Many wore necklaces of shells carved to look like human teeth; a few were made of actual teeth. In another pyramid, copious remains of animal sacrifices have been discovered, including wolves, rattlesnakes, golden eagles, and pumas.

The facade of the Feathered Serpent was designed to be fearsome, with imposing stone carvings of the warlike reptile with a headdress (similar to the Aztec God Quetzalcoatl). Rituals taking place on the temple platform, such as sacrifices, would have impressed the masses crowding below – they instilled fear, perhaps, but would also have given rise to a shared religious sensibility, a way of bringing cohesion to a large, multiethnic city.

Within the newly cleared tunnel were found huge numbers of fragments of the Storm God. Recognizable by his goggle-eyes, fangs, and drops of blood, he was associated with water and fertility, as well as fire, lightning, and destruction. The Storm God was the owner of the underworld’s sacred waters. At the de Young, a gallery places him alongside the Old Fire God, an elderly figure who sits cross-legged and bears a brazier atop his head. With them are the benevolent Water Goddess and the smooth-faced Maize God, the subject of the site’s famous stone masks who symbolized the life-sustaining power of the crop. 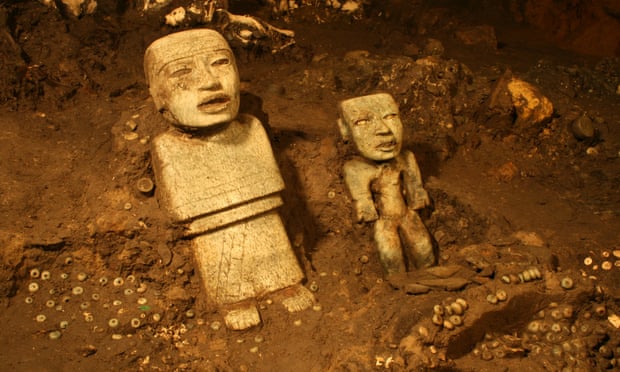 The inhabitants of Teotihuacan would have walked past thousands of square feet of bright illustrated surfaces: the site is celebrated for its red fresco murals, which decorated apartments and public spaces. There are delicate paintings of flowering trees in the exhibition and, less delicately, an image of two coyotes eviscerating a deer. Animals are everywhere in the Teotihuacan visual world – and humans often merge into creatures. One vivid mural is an anthropomorphic feline wearing a headdress and shell necklace. Another fragment from the Street of the Dead is a menagerie of strange mythological hybrids. Yet another shows a bird armed with serpent and spear.

More skillful objects, such as obsidian tools and incense burners, help elucidate historic urban structures, including living areas differentiated according to ethnicity, employment, and rank. Immigrant groups from across Mesoamerica occupied distinct neighborhoods: in this way, the development of Teotihuacan resembled that of such modern cities as London or New York.

The exhibition ends with a marble figure from an elite residential area. Notches in its arms and legs suggest it was tied with ropes to a post, in an echo of the ritual in which a high-ranking military captive was stripped, bound, and shot with arrows. But the standing figure’s particular significance lies in its connection to the demise of Teotihuacan: it was pieced together from more than 160 fragments, having been mutilated by chisels; the fragments were fire-damaged. Such iconoclasm happened simultaneously as the conflagration that razed the city in the sixth century. Who was responsible, and why was it done? It is uncertain: as Matthew Robb, the curator of the show, has said, Teotihuacan resists interpretation and attracts it. Many mysteries remain. 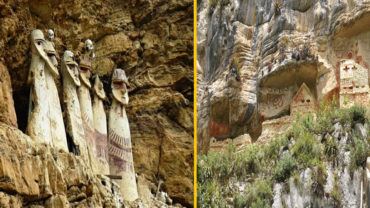