Of all the volcanic eruptions to shake our planet in the last 2 million years, the Toba super-eruption in India was one of the most colossal. But it may not have been the global catastrophe we once thought it was.

The massive eruption happened roughly 74,000 years ago, spewing approximately 1,000 times as much rock like the 1980 eruption of Mt. St Helens. Some thought the fall-out was so extreme that it triggered a decade-long “volcanic winter” and a millennia-long glacial period for a while there.

In recent times, archaeological evidence in Asia and Africa has suggested that while the eruption was indeed tremendous, the consequences were not so apocalyptic after all, and it certainly didn’t leave humans on the brink of extinction.

Now, an ancient and “unchanging” stone tool industry, uncovered at Dhaba in northern India, suggests instead that humans have been present in the Middle Son Valley for roughly 80,000 years, both before and after the Toba eruption.

“Populations at Dhaba were using stone tools that were similar to the toolkits being used by Homo sapiens in Africa at the same time,” explains archaeologist Chris Clarkson from the University of Queensland.

“The fact that these toolkits did not disappear at the time of the Toba super-eruption or change dramatically soon after indicates that human populations survived the so-called catastrophe and continued to create tools to modify their environments.”

The Toba catastrophe theory centers around a correlation, and a controversial one at that. At about the same time the Toba volcano was blowing, all those millennia ago, our species was also going through a genetic bottleneck; the eruption seemed like a plausible cause for this drop in diversity.

But over the years, the catastrophe theory has not held up to scientific scrutiny. In 2007, evidence of stone tools in southern India suggested that the Toba eruption did not lead to extreme cooling or a glacial period.

Some have pushed back and argued that Homo sapiens did not make these tools, but whoever they were sculpted by appeared to survive this natural disaster.

In 2018, further fossil evidence from South Africa added even more support to the idea that global human populations not only made it through the Toba eruption, but they might also have even thrived in its wake.

Geneticists agree that 70,000 years ago, there was an unmistakable drop in human genetic diversity, but that shift may not have been the result of a super-eruption. Some think it might simply be a founder effect.

As humans spread across Eurasia and branched off into smaller and smaller groups, their genetic diversity may have also begun to dwindle. And that’s probably why genetic diversity in Africa is so much higher than elsewhere.

The thousands of newly described stone tools found in Dhaba have helped fill in some of that timeline. The results suggest humans migrated out of Africa and expanded across Eurasia much earlier than expected, surviving a brutal natural disaster in the meantime.

The study authors say most of the tools found in Dhaba resemble African and Arabian techniques from the Stone Age, and some even look like early human artifacts from Australia.

The team claims these are unmistakably human-made, connecting the dots of early migration from Africa to southeast Asia and then to the great southland.

“Modern human dispersal out of Africa, and more importantly east of Arabia, must therefore have taken place before [65,000 years ago],” the authors write.

“The Dhaba locality serves as an important bridge linking regions with similar archaeology to the east and west.”

But without human fossils to back up the find, some remain unconvinced Homo sapiens made these tools. Neanderthals also employed this particular stone tool technique; anthropologist Stanley Ambrose has told Science Magazine he thinks it’s impossible to tell which species made the tools.

If the dates are correct, however, it doesn’t matter who sculpted the tools. Whether created by Homo sapiens or other ancient hominins, the Toba eruption did not nearly wipe out populations in Dhaba.

Although, something else probably ended them. The people who lived here have not contributed much to the modern gene pool, which means they probably faced other challenges to their ongoing survival.

“The archaeological record demonstrates that although humans sometimes show a remarkable level of resilience to challenges, it is also clear that people did not necessarily always prosper over the long term,” says anthropologist Michael Petraglia of the Max Planck Institute. 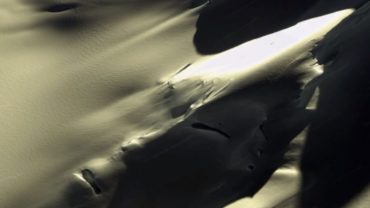