A few years ago, in June 2002, a genuinely fantastic object had come to light in the form of an uncommon stone embedded with a screw-threaded metal bar inside. A Chinese collector from Lanzhou named Mr. Zhilin Wang discovered this enigmatic object near the Marling Mountain region on the borders of the Gansu and Xijiang provinces, China.

The Lanzhou Stone drew enormous attention from many experts and collectors and is suspected of being from outer space.

The descriptive appearance of the Lanzhou Stone

The mysterious stone is pear-shaped (measuring about 8cm × 6cm × 6cm), extremely hard and weighs 466 grams. Incredibly the rock is of an unknown type, suggesting that it may be a meteorite.

However, it is not only due to its unknown composition that the item had attracted enormous attention from many geologists and collectors worldwide but also because of the startling artifact it contained within it ― a screw-threaded metal bar.

Moreover, the screw thread width remains consistent from the thick end to the thin end, instead of varying due to the growth of organisms.

“More than ten geologists and global physicists from the National Land Resources Bureau of Gansu Province, Colored Metal Survey Bureau of Gansu Province, the Institute of Geology and Minerals Research of China Academy, Lanzhou Branch, and the School of Resources and Environment of Lanzhou College gathered to study the origin of this mysterious stone.

After a discussion about its possibility of being artificial and the possible reasons for its formation, the scientists unanimously labeled the stone as one of the most valuable objects in China and the world for collection, research, and Archeological studies.”

During the discussion, the scientists proposed many incredible hypotheses about the formation of this stone. One of the hypotheses says that this stone could be a relic from a prehistoric civilization since a civilization equivalent to ours is thought to have existed on earth before our current one.

The Silurian hypothesis of the existence of prehistoric civilizations:
The Silurian Hypothesis is a thought-provoking work that evaluates the ability of modern science to detect evidence of an advanced civilization before, perhaps a few million or a few hundred million years ago. In a paper called the Silurian Conjecture published in the Cambridge University Journal of Astrobiology, Adam Frank, an astrophysicist at the University of Rochester, and Gavin Schmidt, director of Goddard’s Institute for Space Studies NASA, proposed an advanced civilization before humans appeared and thought “is it possible to detect an industrial civilization in the geological record?” The term “Silurian Hypothesis” was inspired by a 1970s episode of Doctor Who featuring an intelligent reptilian race.

Another theory is that it could be a stony meteorite. It could have brought the information of an extraterrestrial civilization, as the screw-threaded metal bar is tightly enclosed in the black lithic material. Neither the bar’s entrance to the stone nor the exposed bar tip appears to be artificial.

At the end of the conference, all scientists agreed that further research is needed to address questions such as how the stone was formed and whether the “metal bar” is truly metal or not.

What do skeptics say about the Lanzhou Stone?

While many scholars have been baffled by the Lanzhou Stone’s unknown composition and structural formation, many have remained skeptical about this strange-looking object. According to them, the stone looks nothing more like a solidified ball of tar with a screw in it. The source of its creation may be found from the world wars era. Therefore, there’s no need to subject this “rock” to real scientific scrutiny.

The stone’s current location is unknown, and analysis results have not been made public. But there are several exciting assumptions to be made. First of all, the metal rod was fabricated and required a certain technological level to be manufactured. The unidentified black material could have been anything but the perspective of it being produced looks pretty likely. 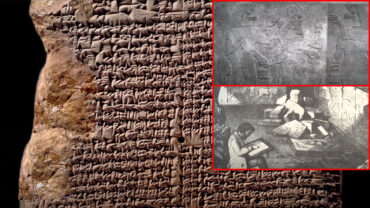