A Minotaur sculpture with a human torso and a bull’s head was discovered in an Argentine Patagonia lake, with a gigantic mask measuring 1.4 by 1 meter.

Six meters from the coast and four meters above the surface, readily visible and even more easily frightened. The submerged monument is a meter, and a half tall weighs 250 kilos, and conceals its heart behind a padlock like a safe. Several visitors to Mari Menuco reported sighting a mystery item submerged in the lake during March and April.

According to LM Neuquen, on Sunday, April 10, a 23-year-old male who did not want to divulge his identity and requested to be called Cristian went kayaking. He observed something under the sea as he returned to one of the bays where his family resided. He flipped his kayak around and returned to check whether that strange rock resembled anything.

“And there I saw it, a minotaur.” It terrified me at first. “There are numerous rumors about that lake that we all laugh at, but I believe there is some truth to the stories,” the guy told the local newspaper. All of his reservations regarding otherworldly entities were verified at that time.

There was a submerged Minotaur in the middle of the lake, but fortunately for Cristian and the people who live nearby, this Minotaur was composed of iron and cement.

Could he now reach out and touch the Minotaur that had been spotted?

“He wasn’t convinced. “At first, he said I was playing with him, but I persisted so much that he consented to attend,” Cristian says.

His 18-year-old cousin’s first impression was the same as Cristian’s when he saw the monument. “I observed his horrified expression and chuckled. “You didn’t trust me; there it is,” I informed him, and he relaxed a little.”

They jumped into the water and attempted to dive, but they did not come into contact with the artwork. Neither of them was prepared, nor did they have the necessary equipment.

“But we were able to view it, which is a positive thing,” said the 23-year-old, who went to the location on subsequent weekends and got intrigued with the issue.

“I became a fan of water after that day,” he remarked.

So, what did the Minotaur symbolize?

Cristian began investigating what a minotaur was doing immersed in a lake and discovered a probable explanation.

The Mapuche Way of Life

The Mapuche are a group of indigenous peoples who inhabit present-day south-central Chile and southwestern Argentina, including sections of Patagonia.

Within the Mapuche worldview, there is something known as the “Gen Ko,” a type of protecting force associated with each location.

“Each part of nature has its own, so the Mapuche always asks permission before entering the lake or felling a tree.” “They want that approval from Gen Ko,” he stated.

Furthermore, when these natural forces feel threatened within this same civilization, they manifest.

“I believe we are causing significant environmental damage and must address it.” Have you noticed how many oil wells surround this lake? It’s a serious issue, and perhaps that’s why someone threw this Minotaur into the lake. “It’s to alert us that we’re doing something wrong,” he said.

To better comprehend the bizarre narrative of a submerged Minotaur in the lake’s center, Lefxaru Nawel of the Lof Newen Mapu of the Mapuche Confederation of Neuquén explained: “In our tradition, all elements, in general, have their Gen, and “Ko” signifies water.” So “Gen Ko” refers to the protecting energies of water.”

“Before it was inundated and the lake was formed, it was a very significant site because many plants were used for medicine and had fundamental properties,” Lefxaru Nawel noted.

“When there are huge locations, like a river, a lake, or a mountain, these forces are personified in animals or supernatural creatures,” he added from his Mapuche perspective. So perhaps the Minotaur represents such protection.”

Beyond the representation that this sculpture might generate, he emphasized that everyone cannot view the Gen Ko. “They are constantly present, but not everyone sees them.” When we enter the water or participate in ceremonies, we always ask permission to intervene. “People in our culture can see them in all-natural components,” Lefxaru Nawel stated.

After two weeks, Cristian returned to Lake Mari Menuco, having discovered reasons ranging from logic to theory and wishing to see the Minotaur again.

He walked out to the lake to get as near the Minotaur as possible. He got into the kayak and attempted, but he failed. “Whoever made the sculpture designed it so that it can only be viewed from above, without the need to descend,” Cristian explained.

Another finding was found after numerous attempts and swimming to the Minotaur with pals. Another sculpture was sunk in the lake: a massive mask.

Cristian and his buddies had stumbled across a massive face jutting from the earth, measuring 1.40 meters by 1 meter, not far from the Minotaur. It had a wide-open mouth, marked lips, and “Eternal Journey” inscribed on the cheekbones. 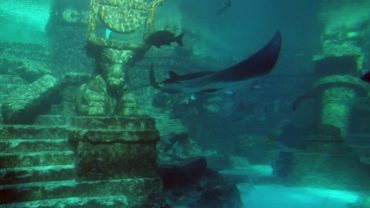